Wolves manager Nuno has spoken of his pride after being honoured by the University of Wolverhampton for his contribution to sport in the region.

The University of Wolverhampton presented an Honorary Doctor of Sport to Nuno Espirito Santo at Wolverhampton Wanderers Football Club’s last home game of the season on Saturday 4 May 2019.

It is thought to be the first time a football manager has received a university honorary doctorate on the pitch at a match.

The honour recognises Nuno’s success over the last two seasons which have seen Wolverhampton gain recognition and attention internationally, returning a sense of pride back to the city and club. He has led the club to the Premier League after a seven year absence as well as taking the team to the FA Cup semi-finals at Wembley. 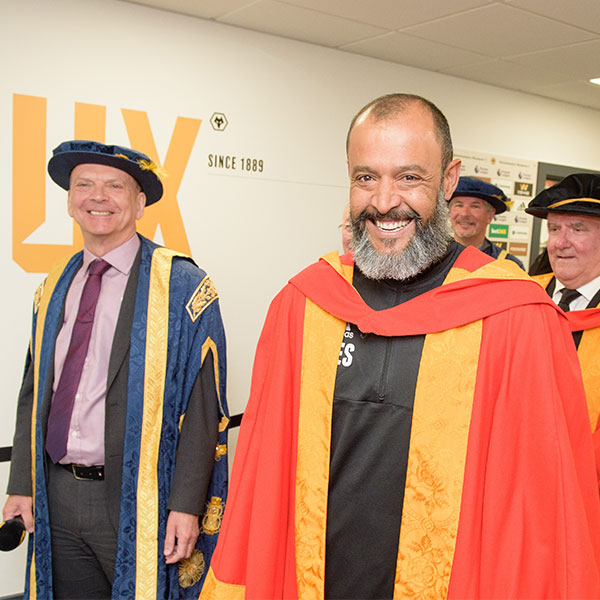 Nuno received the honorary degree on the pitch before the team’s 1-0 win against Fulham at Molineux. 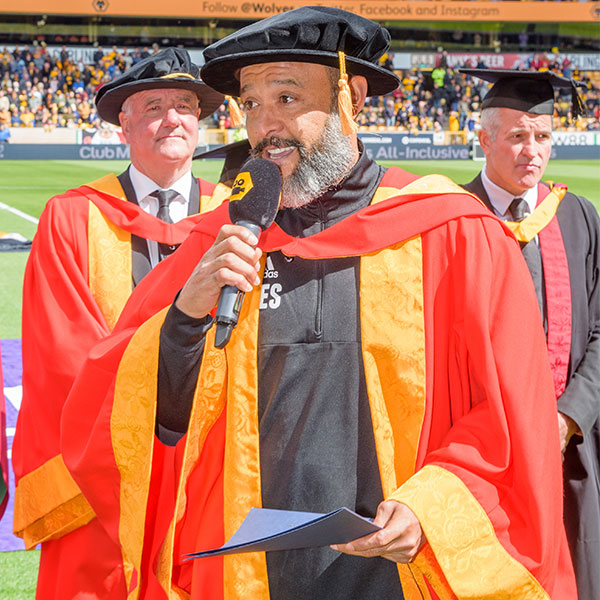 He said: “It is a privilege and an honour to receive the honorary doctorate from the University. Thank you so much. It goes beyond me – it’s for all the players, the staff, the employees, the fans that come to Molineux. It is a commitment to do something together.

“I feel very welcome in Wolverhampton. It has been two years and every day has been a day of warm reception. People have treated me really well and it’s really good to give something back.

“Sport can change lives. Being engaged in a team sport you are able to feel what is human nature and because sport is truly global you can make an example for others to follow and this team spirit and unity should engage us in life also.” 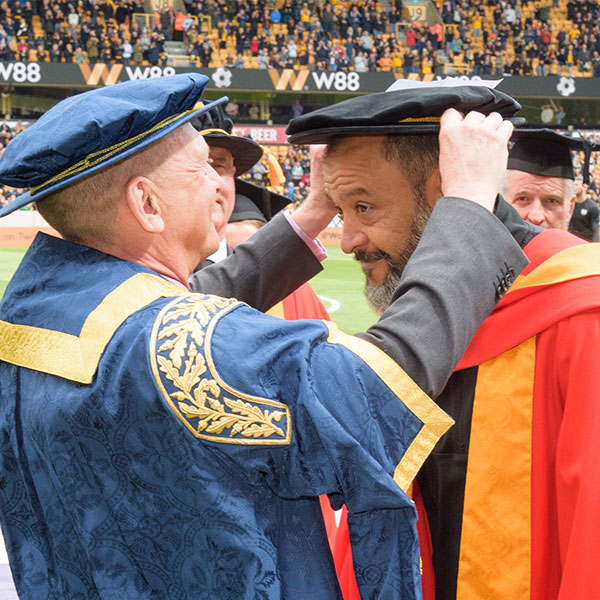 Vice-Chancellor, Professor Geoff Layer, said: “The University is thrilled to have recognised Nuno with an Honorary Doctorate of Sport at the end of such a successful season for the club. In two years, Nuno has transformed Wolves - his first season at Molineux was a triumph as he led the club to promotion and the Championship title, and now we have seen a successful start to life in the Premier League and a Wembley FA Cup semi-final.

“The University of Wolverhampton and Wolves have a close relationship – we sponsor the team, our students complete a variety of placements with the club and of course we are neighbours. Our honorary graduates provide inspiration to our students and we are delighted to recognise a leader who has brought pride and recognition to our city on an international scale.”

Nuno Espirito Santo was appointed Wolverhampton Wanderers’ head coach on 31 May 2017 and led the club to the Premier League in his first full season.

A goalkeeper during his playing career, Nuno has achieved some of the highest international accolades in football as a player, winning both the 2002/03 UEFA Cup and 2003/04 Champions League at Porto and representing Portugal at the 1996 Olympics.

As a manager, he has achieved wide success with numerous teams including Valencia and Porto before joining Wolverhampton Wanderers.

Locally, he has led the transformation of Wolves, guiding them to emphatic Championship title winners in 2017/18 and widespread plaudits and success in the Premier League 2018/19 campaign.

For more information about University of Wolverhampton courses, visit the website or register for the next Open Day on Saturday, 15 June 2019.