Olympic gymnast and University of Wolverhampton student Kristian Thomas put students through their paces as part of National Biomechanics Day.

The bronze medallist from London 2012 led a session on the biomechanics of gymnastics at the University’s Walsall Campus on Wednesday, 10 April 2019.

He was joined by two members of British Judo’s visually impaired squad, Natalie Greenhough and Connah Anders, who also train at the campus. 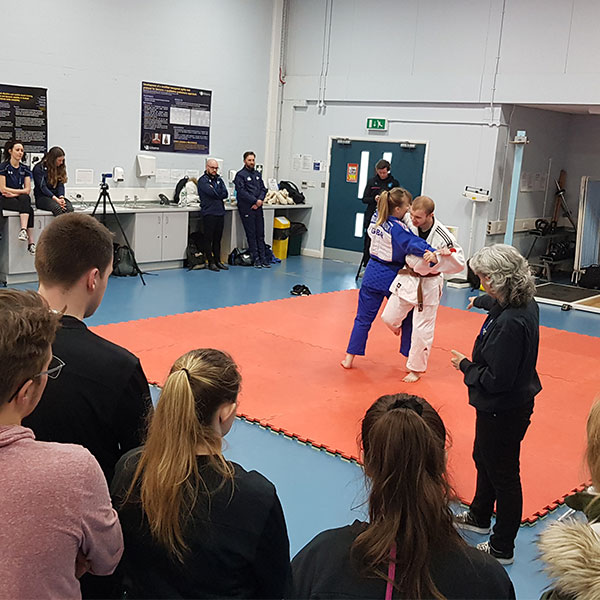 Students from Birmingham Metropolitan College and Aston Villa Foundation were invited to the special event which involved fun practical activities in the biomechanics laboratory.

Kristian, who is in his final year of a BSc (Hons) Strength and Conditioning degree, said: “It was a pleasure to be part of the National Biomechanics Day showcasing the link between biomechanics and elite sport, in this case gymnastics. The students involved were predominantly from a coaching background so to see first-hand uses of biomechanics and it applications within coaching was very helpful.”

The event was led by Dr Tina Smith, Senior Lecturer in Biomechanics at the University of Wolverhampton, and supported by undergraduate and Masters students as well as laboratory technicians from the Institute of Human Sciences.

Dr Smith said: “We were delighted to showcase biomechanics and to demonstrate its many applications, such as how it is relevant to everyday activities, sport, health and even computer games. People may not realise how biomechanics is fundamental to our daily lives so this was a great opportunity to promote the subject to college students.”

National Biomechanics Day is a worldwide celebration of Biomechanics in its many forms for secondary school students and teachers. This year’s theme was ‘Science Meets Fun’.