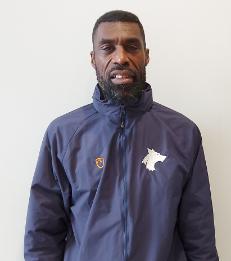 Interesting Fact: I was once a professional basketball player and also known as Big Sky!

Background: Clive started his professional basketball career with the Birmingham Bullets and went on to play in the England basketball team. His educational background took place in the USA where he was a student at Northwest Nazarene University before returning to the UK to play and then later coach basketball. He has coached at the highest level in Basketball with Milton Keynes Lions and Birmingham Panthers who are both part of the National BBL league. Currently, Clive is the head coach for Dudley College basketball and Head of basketball Development at WBA alongside his head of basketball role at the University of Wolverhampton.

We currently have two teams that play in BUCS and have a strong affiliation with a national league side, WLV Albion.

Training is on a Monday 6-10pm and Thursday evening's from 6-10pm in the Walsall Campus Sports Centre.

We currently have one ladies team featuring in BUCS for 2019/20 season but we also compete in the midlands regional leagues.

Training is on a Monday 6-8pm and 6-10pm at the Walsall Campus Sports Centre starting in September.

The women's section welcomes any new members to the club. Whether you are a complete beginner or have played basketball before the club wants to hear from you.