Influential nursing leader, Professor Janice Stevens CBE, has been awarded an honorary degree from the University of Wolverhampton. 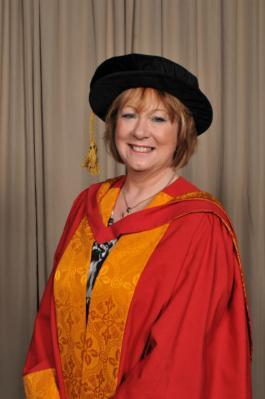 Professor Stevens was awarded an Honorary Degree of Doctor of Science from the University’s Faculty of Education, Health and Wellbeing in the graduation ceremony on Friday, 18 September at the Grand Theatre in Wolverhampton.

Professor Stevens celebrates the honorary degree after developing an extensive career with roles at all levels of the NHS. Over the years, she has worked to develop and improve nursing and patient care standards across the many organisations that she has worked for.

Beginning her career as an A&E nurse, Professor Stevens went on to become a Trust Director of Nursing amongst other roles. In 2005, she joined the Department of Health, working for England’s Chief Nursing Officer, designing and delivering three high profile programmes-reducing MRSA, C. difficile and elimination of mixed-sex accommodation, for which she was awarded a CBE.

Professor Stevens then joined Health Education England as Managing Director of Health Education West Midlands in 2012 and became national director overseeing the three Local Education and Training Boards across the Midlands and East.

In March this year, she was seconded from HEE to become the Interim Chief Nurse at Barts Health NHS Trust, a role that brought her back to her professional roots. Professor Stevens has also been named in 2014 by Nursing Times as one of the most influential nurse leaders.

Professor Janice Stevens said: “I am deeply honoured to have been awarded this honorary degree from the University.

“I have dedicated my career to working on improving and developing nursing and patient care in the UK and over the years have felt proud to have been able to implement the changes that I know have improved patient care.

“It truly means a lot that the University has bestowed me with this honour.

“I would like to thank all of my colleagues, friends and family for their support and am very much looking forward to seeing what the future holds.”