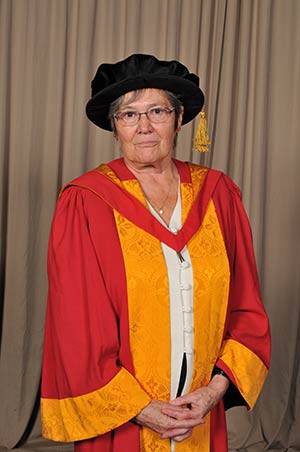 rnment Minister Clare Short has been awarded with an Honorary Degree from the University of Wolverhampton.

Ms Short was MP f‌or Birmingham Ladywood for 27 years and now devotes her time to issues such as slum upgrading and Trade Justice in the developing world, African-led humanitarian action, destitute asylum-seekers in Birmingham, and for a just settlement of the Palestinian/Israeli conflict.

She received an ‌from the Faculty of Social Sciences at a graduation ceremony at Wolverhampton’s Grand Theatre on Tuesday Sept 22 in recognition of her international development work.

"I am deeply honoured to receive this award from a University so near to home that serves many of the children of my former constituents,” said Ms Short.

Ms Short was Secretary of State for the Department for International Development (DFID) from 1997 to May 2003, working on policies for sustainable development and the elimination of poverty.

She previously worked as a Civil Servant at the Home Office, as a Director of Youthaid and the Unemployment Unit and as a Director of AFFOR, a community-based organisation promoting racial equality in Birmingham. She entered the House of Commons in 1983 as the Member of Parliament (MP) for Birmingham Ladywood, the area where she was born and grew up.

In 2003, Ms Short resigned from the Government over the Iraq war and in 2006, she resigned the Labour whip. She stood down from Parliament in 2010.

In November 2004, she published her first book An Honourable Deception? New Labour, Iraq, and the Misuse of Power as an attempt to explain why Tony Blair did what he did on Iraq so that lessons could be learned and things put right. In 2005, it was awarded Political Book of the Year by Channel 4.

She is a trustee of Hope Projects (West Midlands) Ltd, Trade Out of Poverty, the Welfare Association, and Africa Humanitarian Action; and patron of the Israeli Committee Against House Demolitions UK. She is a member of the Advisory Committee of International Lawyers for Africa. In March 2011 she was elected Chair of the Extractive Industries Transparency Initiative (EITI).

For media inquiries please contact Emma Pugh in the Media Relations Office on 01902 322736.