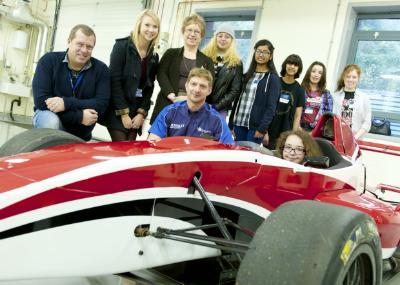 The University of Wolverhampton has bought a Formula Renault car as part of its plans to offer a range of Motorsport and Automotive Engineering courses from 2015.

The new courses will focus on applying technical theory to real world situations, and the students’ involvement in Protyre Formula Renault will enable their project work to be centred around the study of the racing car and its data.

The team, headed up by David Tucker, Principal Lecturer in Mechanical Engineering, will be based at the Telford Innovation Campus and will enter competitions under the name University of Wolverhampton Racing (UWR).

Over the summer, the University invested £500,000 in transforming the engineering facilities at Telford, including new workshops with two car bays, benches and professional tools to support the students’ work on the racing car.

David Tucker, who has worked with driver Shane Kelly over the last few years on the 750 Motor Club Formula 4 Championship and Monopostos, said: “This kind of undertaking is a huge challenge for seasoned engineers, so for students to be placed into this high pressure environment is a real challenge, however what is learned from this experience is invaluable in terms of life and team work skills.

“In addition to this it gives students the chance to overcome the original catch 22 faced by graduates, whereby they cannot gain a work placement until they have experience, but cannot get the necessary experience without being given a work placement – this undertaking allows for real-world experience to be gained while in education, giving them a real edge in terms of future employment and prospects.”

The new courses, which will be available for the 2015/16 academic year, have been identified as areas of growing demand among students and industry.

Shane Kelly raced in Formula Renault UK in 2002 and 2003 before going on to win the Club Formula 3 title in 2006, prior to establishing a career as professional driver on TV and film sets.

“We have had students engineering cars in the past in the championship, and they’ve always been a great addition to the rich tapestry of Formula Renault. We’re looking forward to working with David and his students, and delighted to see Shane return to Formula Renault more than 10 years after he first competed with us in Formula Renault UK.”

Future plans at the Telford Innovation Campus include building expansion with further investment in facilities and equipment, and providing shared space for work with businesses, zoned workspaces for students, new exhibition and display areas and revamped communal and refreshment areas.

Picture: Driver Shane Kelly (crouching, centre) with (L-R back row) University graduate interns David Morris and Alice McGowan, Estelle Rowe Director of the Engineering Development Trust, with year 10 students from around the Midlands who were visiting the Telford Innovation Campus on a Science, Technology, Engineering and Maths (STEM) Outreach activity targeted at promoting engineering as a career for women.