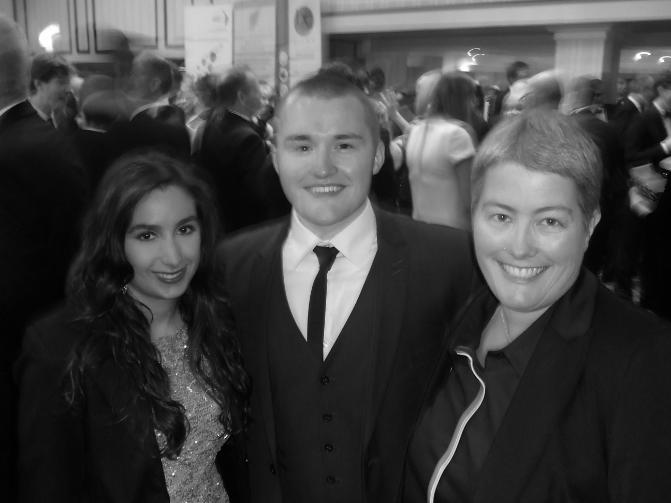 Students and graduates from the University’s School of Media attended the awards ceremony as finalists of the Student Awards.

Over 350 guests attended the black tie event including key media professionals from regional television, national broadcasters and a number of regional competitors in the higher education sector.

This year, the University of Wolverhampton succeeded in receiving three nominations in the Student Awards category.

Talented media students Kamilla Konczewska and Ravnita Rayett were shortlisted under the animation category and Noelle Rubiano was nominated for Comedy and Entertainment.

Noelle Rubiano, who studied Video and Film production said: “Attending the RTS awards was a fantastic experience, but to attend as a nominee was a huge honour.

“To be nominated for such a prestigious award is something I will remember for the rest of my life.

“Even though we came away empty handed, I will always see my nomination as an acknowledgement of the hard work and effort I put into making my film.”

The student awards were introduced by Dorothy Hobson, Senior Lecturer of Media and Cultural and Communication Studies at the University of Wolverhampton and Vice Chair of the Midland Centre of the Royal Television Society (RTS).

Dorothy said: “It was exciting to see students and fellow members of staff from the Faculty of Arts at the awards last evening.

“There were 41 entries from eight universities so to have three programmes shortlisted was a fantastic achievement.

“The standard of entries across all the categories was extremely high this year and students are to be congratulated on being short-listed in Animation and Comedy and Entertainment.


“It is important that students have the opportunity to take part in the Awards Ceremony and to see the professional entries as well as those from their contemporaries from other universities.


“Wearing my RTS hat, I would like to congratulate everyone involved and hope to see even more entries next year.”

The Associate Dean for the School of Media, Will Foster and academic staff joined the students to offer support and congratulate their success.

Tracy McCoy, Course Leader Video and Film Production said: “The nominees all looked fabulous in cocktail dresses and suits and fit right in with the TV professional from our region.

“It was amazing to see a vibrant higher education production sector and to know that we can hold our own within it, with regular nominations.

“Though sadly no wins on this occasion, we are rightly proud of our nominees and wish them all the best with their future productions.”

The University intend to enter more categories next year and we will continue to use the Royal Television Student Awards as an aspirational goal for its students.