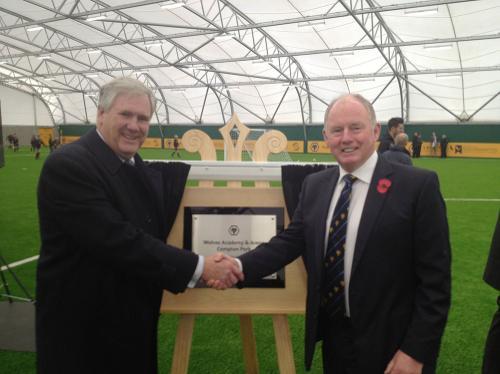 The University is the principal sponsor for the new £7m facility at Compton Park, which was officially opened today (Thursday November 6 2014)

Guests and dignitaries from across the city attended the event and were joined by first team players from Wolves, led by captain Danny Batth and manager Kenny Jackett, and young players from the academy teams and staff.

At the event club chairman and owner, Steve Morgan, announced that the facilities classroom was to be named after Sir Geoff Hampton.

Sir Geoff recently retired from his role as a Deputy Vice-Chancellor and is now Chief Executive of the University’s Education Central, which works to raise standards in schools and looks after the University’s family of academies. A former head teacher, he was awarded his knighthood in 1998 in recognition for transforming the fortunes of the then failing Northicote School.

Mr Morgan praised Sir Geoff for his role and vision in the Compton Park development, which involved the University vacating the then Compton Campus and a £50m private/public partnership which led to the training complex being built alongside a new site for St Edmund’s Catholic Academy and 55 new homes being built by Redrow Homes.

The University then reinvested money from the sale of the site into its new city centre science facility.

Sir Geoff said: “It is a great honour and I’m delighted to see the project come to a great ending. The academy arena is first class and it’s wonderful to see the young players in the classroom learning and using the latest technology to improve their education and footballing prowess.

“The opportunity on this site to create something like this needed a lot of parties to work together and the end result was a win for everyone involved including St Edmund’s, the city, the club and the University.

“It is great facility and as a lifelong Wolves fan who stood on a milk crate on the North Bank and saw the 1960 FA Cup winning side come back to the Town Hall with the trophy it is a privilege to have the classroom named after me and seeing the project come to fruition.”

Steve Morgan, Chairman of Wolves, said, “We’re delighted to recognise Sir Geoff’s crucial role in the overall Compton Park development. He came up with the idea of the University of Wolverhampton, St Edmunds Catholic Academy, Redrow and Wolves working together to create a special development for the entire City. It’s very fitting that the Classroom here at the Wolves Academy is now named after Sir Geoff as a long lasting tribute.”

The University signed a three year deal to become the academy’s principal sponsor in the summer.

Professor Ian Oakes, Deputy Vice-Chancellor at the University of Wolverhampton, said: “The University is delighted to be the sponsor of this prestigious training academy for many reasons- not least of all because it aligns so closely with the University’s motto of Innovation and Opportunity.

“Wolves are at the cutting edge of new innovative techniques for improving sports performance and a number of the University’s research experts are assisting the club with such developments. Furthermore, our partnership is providing opportunities for students through work experience and internships as well as the opportunity to use the facilities for training purposes.”

As part of the deal the University logo is on the front of all the Academy age groups playing shirts, up to and including the u18s side as well as being prominently positioned within the academy building and at Molinuex.

Also around fifteen internships are being provided across the Club, specifically for University of Wolverhampton graduates.

The roles will cover areas such as Sports Science, Medical, Media and Commercial specialisms and will provide a unique, and long-term, football club to university link.