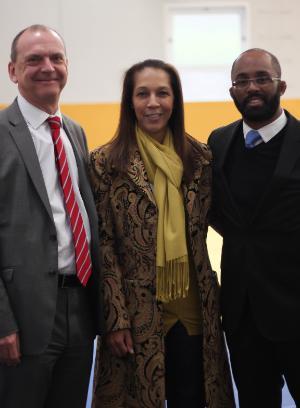 Helen Grant MP, Minister for Sport and Tourism, visited the Walsall Campus as part of a regional visit.

The minister, who was under-16 Judo Champion in North of England and Southern Scotland, was presented with a Judo suit by Kerrith Brown, Chair of the British Judo Association.

And she took to the mat with some of the rising stars of the sport to practice her judo moves, including University of Wolverhampton student Ebony Drysdale-Daley.

She also met Wolverhampton student Jodie Myers, who won a silver medal in the female judo over 78kg category at the 2014 Commonwealth Games in Glasgow.

Helen Grant said: “It was so lovely to put on a judo suit again. I started when I was six and stopped when I was 13 – I loved it and did it competitively. It is great to see some of the rising stars and the fantastic facilities they have here.

“This Centre is fantastic. Our judo team is very strong and I am delighted that they have got the facilities they need and deserve.”

University Vice-Chancellor, Professor Geoff Layer, said: “We were delighted to welcome Helen Grant MP to the home of British Judo at our Walsall Campus. It was great to see Helen joining in with the British Judo squad during their training session. 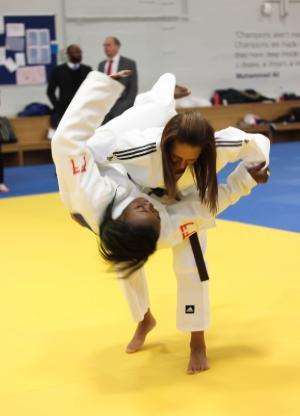 “We recently launched our Institute of Sport, bringing all our sporting activities together and emphasising our commitment to improving facilities for students, staff and the community.”

‌Kerrith Brown, Chair of the British Judo Association, added: "It is fantastic that one year on from formal opening of our Centre of Excellence we have had a visit from the Sports Minister, Helen Grant, who showed a keen interest in the Centre and was impressed by the facilities and the staff there.

"Given the Minister’s own judo background, we presented her with a judo suit and invited her to get on the mat to test her skills against Junior World silver medallist, Ebony Drysdale-Daley, and former VI World Bronze medallist, Jonathan Drane, and she remembered some of the moves.

"We are delighted that the Minister of Sport participated in the event and enjoyed the whole process.  The Vice-Chancellor of the University and myself were on hand to meet and greet the Minister and we showcased the Centre, which is built upon the unique partnership we have with the University of Wolverhampton.

As well as joining the training session during the visit on Thursday (November 20), Helen toured the gym facilities and met with the Performance Director and key staff at the Centre of Excellence. She said she was very impressed with the facilities and with how the Centre is developing the next generation of athletes.

The British Judo Centre of Excellence was opened by Denise Lewis OBE in November 2013.