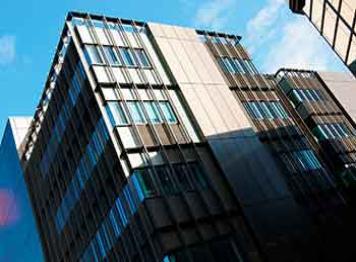 The ground and first floors of the Rosalind Franklin Building in Stafford Street have been completed by contractors Kier.

The first phase completion means the main entrance and lobby area and outreach lab, aimed at getting local schools and colleges more engaged with science, are now open.

The first floor houses new chemistry labs for the first cohort of BSc Chemistry, the course having been re-introduced at the University after a 10 year absence.‌

The lab features bench space for up to 90 students, flexible power and water supplies, touch screen tablets so lectures are interactive for students.

The remaining four floors will be completed as part of the second phase of work and are due to be handed over to the University by the contractors in December with a view to them being open to students from early 2015.

The redevelopment saw the demolition of much of the former MB Building and a new six storey building built around its frame.

Covering 6,000 square metres it will be home to new state-of-the-art science and research laboratories covering the areas of chemistry, forensics and biology, pharmacy, biomedical, microbiology and polymers and biotechnology and will be home to around 2,500 undergraduate and postgraduate students.

Vice-Chancellor of the University of Wolverhampton, Professor Geoff Layer, said: “This is a fantastic facility and we are delighted to have the opened the first phase.

“It is a real statement and investment in science by the University and provides first rate labs for our students to learn in. Not only that but now we have an outreach lab available so we can engage with local schools and show pupils the magic of science too. 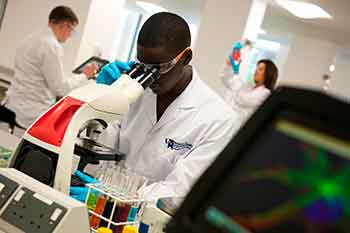 “We now look forward to the second phase being completed and the whole building being available to staff and students. We feel it is very welcome addition not only to the University but to Wolverhampton.”

‌The scheme has been project managed by Faithful and Gould, designed by Berman Guedes Stretton, constructed by Kier and Tweedale has been the term contract architects.

The centre has been named after Rosalind Franklin- a British scientist who carried out pioneering work and was the first person to photograph and identify the double-helix shape of DNA.

Her work with Maurice Wilkins laid the foundations for the later discovery of the structure of DNA by Francis Crick and James Watson- for which all three men received a Nobel prize in 1962.

Franklin died aged 37 in 1958 of ovarian cancer and was not recognised as Nobel prizes are not awarded posthumously and many leading commentators acknowledge that her contribution to the breakthrough was overlooked and undervalued.