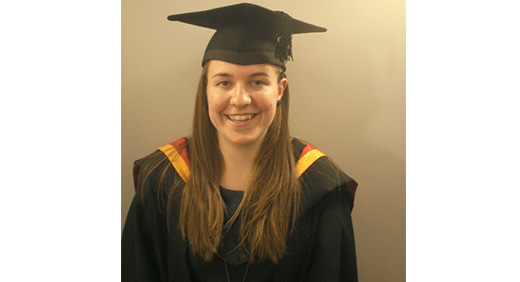 Rosie Walton, a graduate from the University’s School of Law, Social Sciences and Communications, has been awarded the School’s Caparo Prize due to her outstanding efforts on a work placement.

The Caparo Prize is awarded to the student who has made the most significant contribution during their programme of study for an outstanding work placement within an organisation in the private or public sector in the West Midlands.

Rosie’s placement was with BID Services, a Birmingham based charity who have been working with deaf people and other communities since 1872.

BID provides support to people in the community with hearing loss, visual impairment and physical disabilities to help them achieve greater control over their lives.

Her time with BID ran alongside her BA (Hons) Interpreting (British Sign Language/English) degree course which she passed with first class honours. Since graduating, Rosie has taken up employment with BID as an “in-house interpreter”.

Speaking about her award, Rosie said: “I am over the moon but honestly I feel a bit unworthy!

“During my time at University we were encouraged to take up all opportunities that we were given and from these I’m pretty sure I was able to achieve what I have done.

“In the future I hope to become a freelance interpreter and would love to be able to work at conferences and possibly learn another countries sign language, to expand my client base and open up the possibility of travelling and working!”

Rosie was just one of the students taking part in the University of Wolverhampton’s graduation ceremonies, which took place at the Grand Theatre, Wolverhampton, from Thursday 5 September to Friday 13 September 2013.