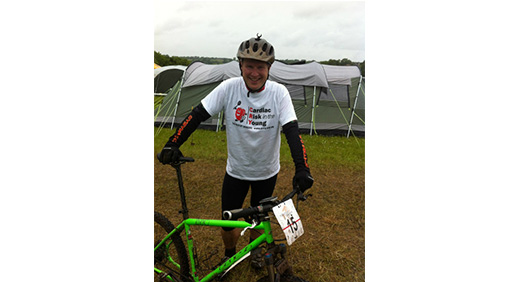 The event, held this year at Gatcombe Park, Gloucestershire, encourages biking enthusiasts to compete in the race whilst raising funds for their chosen charities.

This year, Paul chose three charities to represent – Cancer Research UK, Cardiac Risk in the Young, and Help for Heroes.

Speaking about the event, Paul Boden said: “For many years I have competed as part of a team in numerous 24 hour endurance races, but recently I’ve decided to go it alone.

“For this event the course was just under seven miles long, and 95% of the lap was contained within the woods on single and double tracks. For such an ‘all ability’ course I thought the climbs after the midway point were brutal.

“Seeing professional and top team riders off their bikes and pushing or running with them made me feel a little better when I had to dismount to ascend!

“On completion of the event I'd managed to complete 10 laps (two more than I managed last year) and clocked up well over 100 kilometres in the process.

“I would personally like to thank all of my sponsors for taking the time to donate. At points of the event when things went mentally dark it’s the donations that kept me spurred on, and they’re all very much appreciated.

“At the time of writing, we’ve raised over £800 between my three selected charities.”