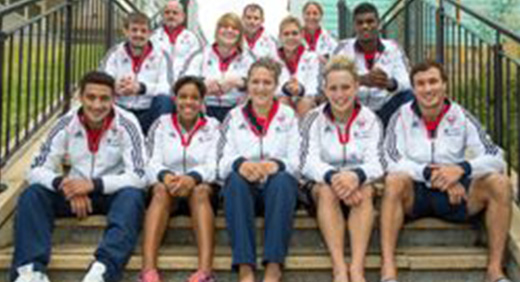 The squad is currently completing last-minute training at the University’s Walsall Campus, ahead of the 2013 World Championships in Rio de Janeiro, Brazil, later this month.

All nine members of the squad are staying in Walsall until Sunday, August 9.

They have been completing a programme involving judo fighting training and test fights between top ranked players in each weight division.

Open training sessions have also been held, where local players have been invited to train with the British team members; other training has included use of the gym, athletics track, swimming pool, and recreational sport like basketball.

Members of the public have also been able to go along and watch the team in action from the stands.

Michael Chamberlain, Director of Sport at the University of Wolverhampton, said: "Hosting the world championship training camp has been a fantastic experience for the University.

“Walsall Campus has provided the country’s top players, including the 2012 Olympic Team, the perfect preparation for Rio. The team has had full board in the student village and used all of the excellent sports facilities on offer.

“There has been real excitement ahead of the opening of the new GB Centre of Excellence in October this year, when many of the top players will come to live and train on campus all year round"

Earlier this year, the British Judo Association announced the University of Wolverhampton as its new Centre of Excellence in England.

The selection followed a rigorous tender process, with a number of facilities bidding to host the centre and a panel with key internal and external stakeholders, including UK Sport, decided that the University of Wolverhampton was the strongest location.

The centre, expected to open in October at the University’s Walsall Campus, focuses on delivering a training programme to the association’s junior and transition athletes, aged between 17 and 22, with the vision that the centre will evolve into the main centralised training facility for the sport.