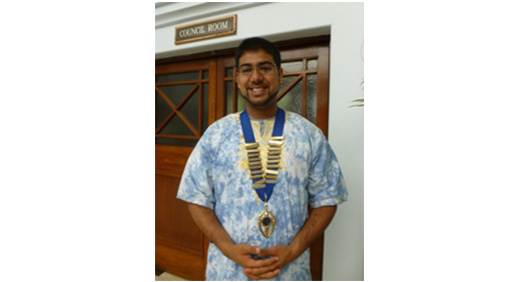 Simeon Chandra has been elected to the top spot by his peers, taking over from Dan Batchelor, who has been in the role for the past year.

And Simeon said one of his key aims for the upcoming term was to help students leave the University with more than just academic qualifications.

He said: “Going to university is about learning how to live your life as much as it is about getting a degree. So I want to set things up like cooking lessons, to teach life skills.

“I also want to really shout about the successes the University achieves.”

While serving as president, Simeon, who was raised in Kenya, will also be finishing the final year of his civil engineering course.

The 22-year-old, whose family now live in Hull, said he would also campaign to have touch-screen televisions installed around the city campus which would advertise events around the University and which linked to the Students’ Union website.

He said: “I am really passionate about this university. It has given me personally so many opportunities. I was going to go to another university originally but this place was so much more organised in finding me a place.”

Professor Ann Holmes, Deputy Vice-Chancellor, Academic, said she agreed with Simeon that the University had to offer more than just a degree.

She said: “Simeon has shown real commitment in developing a working partnership with the University, which will really enhance the student experience.

“His ideas are really relevant; in the current climate, we have to make sure students come out of their course ready for the world of work.

“It is about making sure we cater for the individual student’s needs, rather than merely students as a whole group.”