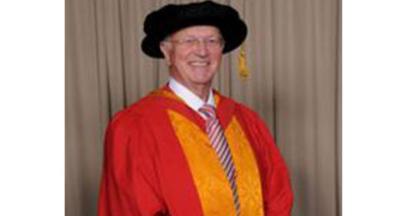 The head of a leading West Midlands engineering company has received an honorary degree from the University of Wolverhampton.

The honour was presented at the Grand Theatre in recognition of Roy’s inspirational business acumen, and significant contribution to the regional economy through the promotion of Knowledge Transfer initiatives.

Roy, who received his award from the University of Wolverhampton Business School, said: “Collaboration between universities and industry has many advantages, some obvious such as the achievement of a cutting edge objective, and others more subtle, such as the development of relationships where real growth takes place.

“This great honour bestowed upon me illustrates the practical and mutual benefits that can be achieved when academia and industry work closely together. New ways should be sought to encourage greater engagement.”

After completing his secondary education at Dudley Technical College, Roy undertook a General Engineering Apprenticeship at British Steel before going on to gain City and Guilds qualifications and an HNC in Production Engineering.

During the early 1960s, Roy became the Chairman of the Apprentice Association and, after a short time as a junior Plate Mill Engineer, he moved to Horseley Bridge and Thomas Piggott, spending seven years as Training Instructor and then Training Manager.

Prior to becoming Managing Director of Malthouse Engineering in 1983, Roy spent time at BSA in the metal components division, GPG (the plastics division of Guinness), where he gained experience of sales and management training, and Ibstock Building Products. Since joining Malthouse Engineering, Roy has led a management buy-out, 14 acquisitions, and grown sales turnover from £1,500,000 to £18,000,000.

Roy founded the Profilers Product group in 1986, using the National Association of Steel Services Centres (NASS) as the “secretariat”, and later became the President of NASS in 2005.

Roy has a Diploma in Management Studies from the University of Wolverhampton and has worked closely with the University’s Knowledge Transfer Partnership (KTP) team for the past 10 years.