Talented students at the University of Wolverhampton are celebrating after beating off tough competition to win two prestigious film-making awards. 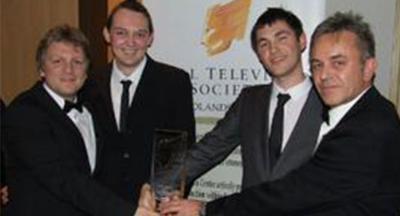 Jamie Cartwright clinched the top award in the Animation category at Thursday night’s ceremony in Birmingham for his piece Cecil the Cat Burglar.

Charlotte McCabe was nominated in the same category as Jamie for her work Fragmented.

The awards recognise the best audiovisual work created by students as part of their course and the Wolverhampton students were up against nominees from universities and colleges from across the Midlands.

The awards were presented to the students by Birmingham-born actor David Harewood, who is currently starring in the hit Channel 4 series Homeland playing David Estes, Head of the CIA Counter Terrorism Unit.

The winners will go forward to the national competition with the other regional winners, and if successful will be invited to the National Awards in London in Spring 2013.

Director-Producer of Shoeless, Phil Noakes, 23, from Shrewsbury, is currently working as a Graduate Intern at the University’s Institute of Media Arts. He said: “We are all ecstatic to have won this award. The film was a great project to work on as part of my University work, and it’s really exciting to have been recognised in this way.”

Jamie Cartwright, 23, from Atherstone in Warwickshire, said: “I’m thrilled to have received the Royal Television Society Student award. Working on Cecil the Cat Burglar was really enjoyable but it also provided valuable experience of working on a live project.”

Tracy McCoy, course leader for BA (Hons) Video and Film Production, added: “We are proud of all our nominees and particularly pleased for Phil and his team. The opportunity the RTS Gala Awards offers for students and staff to network with broadcast industry professionals and their contemporaries from other universities is invaluable. This is the second time we have won in this a category and we look forward to extending the breadth of our submissions in future years.”

Steve Arnott, course leader for BA (Hons) Animation said: “Both Charlotte and Jamie have done really well to come this far. Charlotte was runner-up in the Animation category and will also go on to great things. Jamie now has the chance to compete at a national level with the other regional finalists.

“A win at the national RTS could lead to a BAFTA nomination - BAFTA winners are automatically put forward for the Oscars. I may sound far fetched, but that's how Nick Park ended up with his first Oscar. Jamie's film Cecil the Cat Burglar has huge commercial potential and I'm sure we'll be seeing much more of him and Jamie in the future."

Pictures: Two pictures of the winners are available on request. Please contact Vickie Warren in the Media Relations Office on 01902 322736