Terry Last, Chief Executive Officer of Tarmac, has been given an Honorary Degree of Doctor of Business Administration from the University of Wolverhampton. 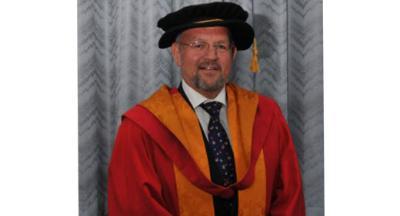 In a ceremony on 4 April at Wolverhampton’s Grand Theatre, he was presented with his Honorary Degree by Professor Geoff Layer, Vice Chancellor of the University. The prestigious accolade was awarded in recognition of Terry’s outstanding contribution to business.

Terry - who has worked in the quarrying and construction materials industry for 43 years - has headed up the £1.5bn turnover, Ettingshall-based firm since 2010, having joined the business in 2001. Tarmac employs around 4,500 employees across the UK, with around 500 based at its Millfields Road HQ.

Commenting on his honour, Terry said: “I was genuinely delighted when I was told that I was going to given an Honorary Degree from the University of Wolverhampton Business School. Despite having worked in this industry for 44 years, all of my training and qualifications have been what is classed today as ‘continual professional development’, so this was my first graduation ceremony. Everyone at Tarmac is proud of the company’s Midlands roots, so it felt extra special to receive the degree from our local University. I thoroughly enjoyed the evening, and felt very honoured to represent Tarmac and receive this degree in front of my family.”