Courtroom skills put to the test 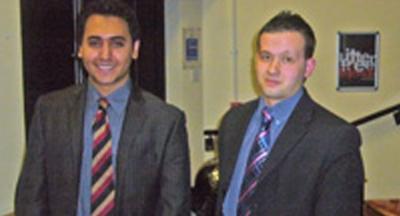 ‌
The School of Legal Studies students took on Birmingham City University in the quarter finals and will now go through to the semi finals against the University of Hull at Gray’s Inn later this month.
Dean of the School of Legal Studies, Brian Mitchell, said: “Following on from recent mooting victories against the tough opposition of Universities of Aberystwyth, Staffordshire and Warwick, this is further evidence of the high quality of law students at the University of Wolverhampton.”
Mehran Kamranfar, Lead Counsel, said:"We are delighted to progress again in this competition and now hope to book our place in the final."
Mehran and Todd took part in a ‘moot’, which is a mock court case. Two teams compete by arguing a fictitious legal case in front of a Judge. The case (or "moot problem") concerns various contentious legal issues and points of law. It is then up to the two teams, the Respondents and the Appellants, to present their side of the case to the Judge.
The moot was held in the Courtroom of Dawson Building at Birmingham City University last Friday (February 1)