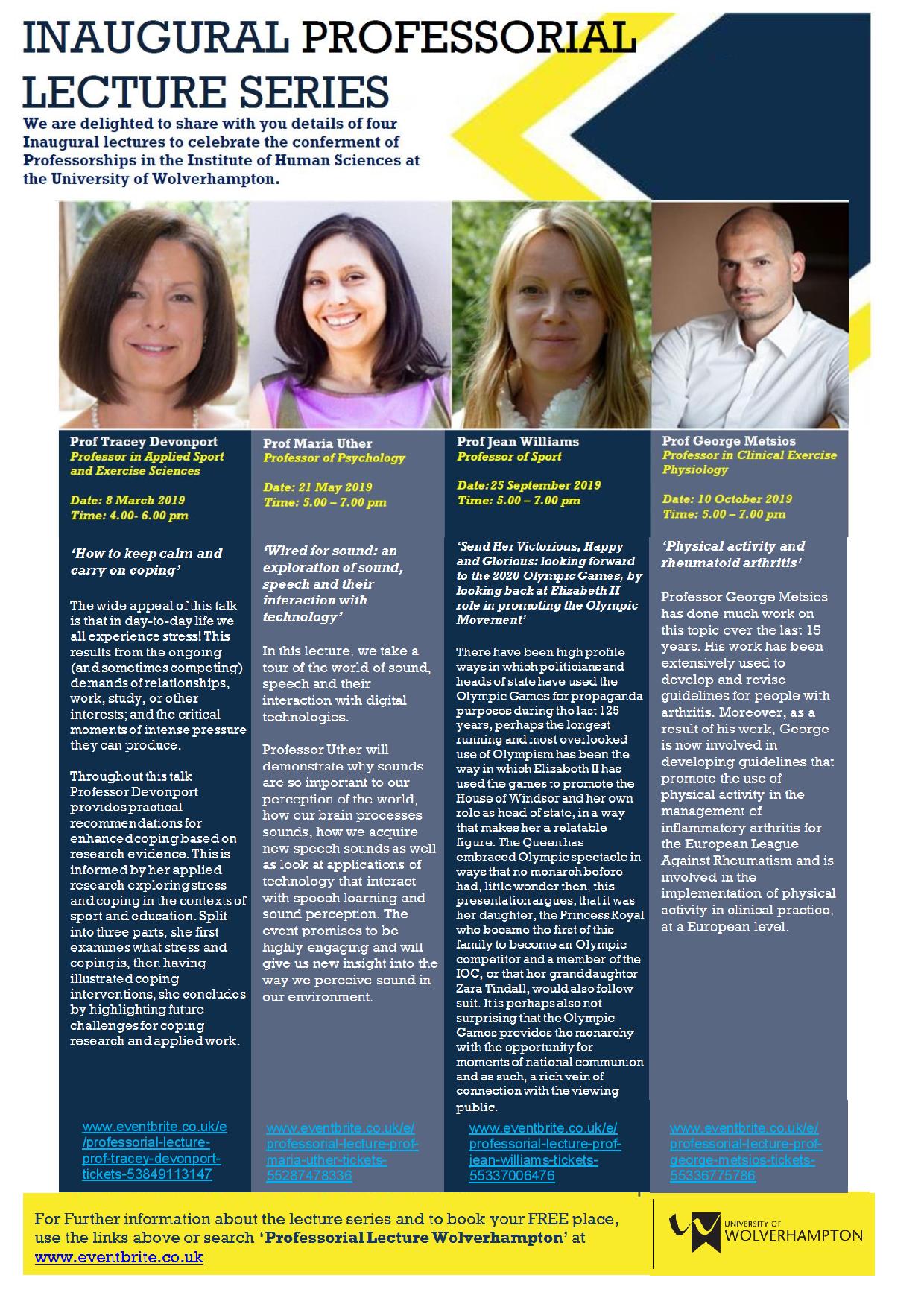 The Institute of Human Sciences, Faculty of Education, Health and Wellbeing, has announced a series of Inaugural Professorial Lectures to celebrate the conferment of Professorships within the Institute.

In this first lecture on International Women’s day, we welcome Professor Tracey Devonport. Tracey is a Professor of Applied Sport & Exercise Science at University of Wolverhampton. Her work on coping, emotional eating and applying interventions across contexts has not only been highly published but helpful with hundreds of athletes and students. Profile Tracey Devonport

The wide appeal of this talk is that in day-to-day life we all experience stress! This results from the ongoing (and sometimes competing) demands of relationships, work, study, or other interests; and the critical moments of intense pressure they can produce. Throughout this talk Professor Devonport provides practical recommendations for enhanced coping based on research evidence. This is informed by her applied research exploring stress and coping in the contexts of sport and education. Split into three parts, she first examines what stress and coping is, then having illustrated coping interventions, she concludes by highlighting future challenges for coping research and applied work.

Tracey Devonport is Professor of Applied Sport and Exercise Science at the University of Wolverhampton. She has produced over 60 journal publications examining stress, coping and emotion regulation and two edited books. In 2015 she was made a fellow of the British Association of Sport and Exercise Science (BASES) for contributions to the sport sciences and BASES (FBASES). She is also a Fellow of the Higher Education Academy (FHEA). She has over 20 years applied experience as a Sport and Exercise Psychologist; and is a BASES accredited sport scientist and HCPC registered sport and exercise psychologist. Tracey currently leads the Research Centre for Sport, Exercise and Performance.

In this lecture, we take a tour of the world of sound, speech and their interaction with digital technologies. Professor Uther’s talk will demonstrate why sounds are so important to our perception of the world, how our brain processes sounds, how we acquire new speech sounds as well as look at applications of technology that interact with speech learning and sound perception. The event promises to be highly engaging, entertaining and will give us new insight into the way we perceive sound in our environment.

Professor Maria Uther is a psychologist with an MSc in Occupational Psychology and a PhD in auditory cognitive neuroscience. She has research and teaching interests in sound, speech and digital technologies. Professor Uther publishes extensively in these fields and has secured grant funding from a number of prestigious sources including the Engineering and Physical Sciences Research Council, the Economic and Social Sciences Research Council, Sharp Corporation and the Nokia Foundation. Professor Uther has a highly unique mix of expertise in auditory perception, the use of mobile technologies and brain research methods. She is a sought after expert in the field of auditory perception and digital technologies.

Although there have been high profile ways in which politicians and heads of state have used the Olympic Games for propaganda purposes during the last hundred and twenty five years, perhaps the longest running and most overlooked use of Olympism has been the way in which Elizabeth II has used the games to promote the House of Windsor and her own role as head of state, in a way that makes her a relatable figure. Although she has been patron at of the All England Lawn Tennis and croquet club at Wimbledon for over sixty five years, she has attended the championship only four times, for instance. Whereas, as both a head of state, and as a holidaymaker, she has attended numerous Olympic Games, since the second London Olympics in 1948 when King George VI, Queen Elizabeth and Queen Mary opened proceedings. By 1948 Princess Elizabeth, in her late twenties was the world personality who most embodied the hope of the times, after the horrors of World War Two. Having already married Prince Philip in 1947, after a short engagement, and with their first child Prince Charles born in 1948, Elizabeth, along with her sister Margaret, was a glamorous figure at the second London Olympics. She would accede to the throne, in 1952 as head of the Commonwealth and queen regnant of Australia, Canada, Ceylon, New Zealand, Pakistan and South Africa, as well as the United Kingdom. The Coronation in 1953 combined pomp, references to antiquity, ritual and modern mass communication. In many ways the Olympic brand and the young beautiful monarch celebrated a display of lavish Technicolour. This continued as the equestrian expertise of Elizabeth was celebrated at home and abroad. Although the 1952 Olympic Games were held in Helsinki, Melbourne Australia hosted in 1956 with equestrian events in Stockholm, and through boycott, dissent and the increased politicisation of the Olympic Games, the enthusiasm of the Windsors remained. Well before we were led to believe a serving monarch jumped out of a helicopter along with James Bond to open London 2012, the Queen has embraced Olympic spectacle in ways that no monarch before had, quite, or for quite so long. Little wonder then, this presentation argues, that it was her daughter, the Princess Royal who became the first of this family to become an Olympic competition and a member of the IOC, or that her granddaughter Zara Tindall, would also follow suit. As the national anthem is played or sung for each medal, it is perhaps also not surprising that the Olympic games provides the monarchy with the opportunity for moments of national communion, and as such, a rich vein of connection with the viewing public.

Professor Jean Williams has written extensively on the history of the Olympic Games, and on the history and culture of sport. Jean’s monograph on Britain’s Women Olympians, called Send Her Victorious is due for completion in the next year.

Rheumatoid arthritis is a debilitating long-term condition characterised by functional disability, pain and fatigue. It is also associated with systemic manifestations, most notably an increased risk for cardiovascular disease. There is strong evidence to suggest that increasing physical activity and/or exercise can simultaneously improve symptoms and reduce the impact of systemic manifestations of RA. However, implementation of interventions to facilitate increased physical activity and/or exercise within routine clinical practice is slow, due to patient-specific and healthcare professional-related barriers but also due to lack of relevant infrastructure and provision. This talk will focus on the physiological adaptations of increased physical activity and/or exercise in RA and propose implementation models for facilitating the long-term engagement of RA patients.

Professor George Metsios has done much work on this topic over the last 15 years. His work has been extensively used to develop and revise guidelines for people with arthritis. Moreover, as a result of this work, George is personally now involved heavily in writing guidelines as well for the leading European Organization European League Against Rheumatism and is responsible for the implementation of physical activity in clinical practice, at a European Level.