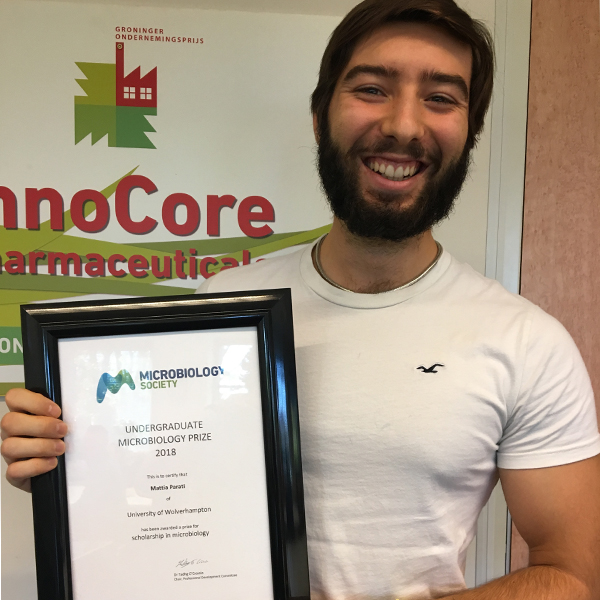 This year, the Microbiology Society Prize was awarded to Mattia Parati, who is a second year student studying microbiology at the University of Wolverhampton.

Mattia was nominated for the prize in August by his University course tutor Professor Izabela Radecka, of the Department of Biology, Chemistry and Forensic Science. Although by the time it was confirmed, Mattia had already embarked on his overseas Sandwich Year Placement, with InnoCore Pharmaceuticals in The Netherlands.

This was followed by the successful completion of Mattia’s second year studies on his BSc (Hons) Biotechnology degree course.

Mattia was delighted that his hard work had been acknowledged by this prestigious award, which came with Society membership and other benefits, and commented “I will never be able to sufficiently thank all of the Departmental lecturers who provided me with thorough answers to all of my questions together with stimulating discussions. In addition, I would like to extend my gratitude to the Microbiology Society for recognizing all of the hard work I have dedicated to my studies”.

Mattia is currently at InnoCore Pharmaceuticals pursuing his placement investigating the formulation and process development of microspheres for drug delivery. This involves the development of hydrogels for the delivery and sustained release of hydrophilic compounds - such as protein based drugs.