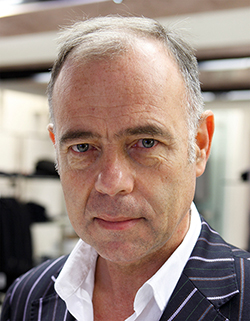 I completed my university degree at Humboldt University, Berlin, Germany where I studied from 1974 to 1979. I was privileged to have as my doctoral supervisor one of the pioneers of the German Computer Science, Prof Dr Nikolaus Joachim Lehmann at the Technical University of Dresden where I received my PhD on 9 January 1987, Germany. I joined the University of Wolverhampton on 2 October 1995. Since 1997, I am Professor of Computational Linguistics and Language Engineering and the same year I founded the Research Group in Computational Linguistics which I have led ever since. I am Director of the Research Institute for Information and Language Processing which consists of two internationally renowned research groups – Statistical Cybermetrics Research Group led by Prof. Mike Thelwall and the Research Group in Computational Linguistics.

Prior to coming to Wolverhampton, I was Research Professor at the Institute of Mathematics, Bulgarian Academy of Science. I was also Fellow of the Alexander von Humboldt Foundation in 1993, and 1994, at the Saarland University and University of Hamburg.

I am / have been working on a variety of topics in Natural Language Processing and so far I have authored or co-authored more than 240 publications. I am still interested in (and involved in research on) anaphora resolution and the automatic generation of multiple-choice tests - topics for which I have been extensively cited.  Recent topics which I have researched and published include translation memory, computational treatment of multiword expressions, sentiment analysis, language change, readability, simplification and NLP for people with language disabilities. Previous topics include but are not limited to automatic identification of cognates and false friends, machine translation, the use of NLP methodology and corpora to verify the validity of translation universals, bilingual term extraction, textual similarity, text summarisation, centering, question answering, temporal processing, CALL and annotation of corpora. The University of Wolverhampton has an open repository - WIRE - where a selection of my recent publications can be searched for by name and downloaded freely. WIRE also lists all my past publications.

I am author of the book Anaphora resolution published by Longman, and editor of the Oxford Handbook of Computational Linguistics (Oxford University Press). Currently I am working on the second and substantially revised edition of this Handbook which is close to completion and will be published in 2019. Many of the chapters have already been published online.

I am Coordinator of the Erasmus Mundus Master programme ‘Technology for Translation and Interpreting’.

Currently I give lectures on this programme as well as the other two Master programmes run by the Research Institute of Information and Language Processing: Computational Linguistics as well as Practical Corpus Linguistics for ELT, Lexicography and Translation.

I am invited to give lectures at overseas Master programmes which include Traducción para el Mundo Editorial at the University of Malaga and Lenguas y Tecnología at the Polytechnic University of Valencia. I also regularly give lectures different European Universities as part of Erasmus+ agreements.

I supervise postgraduate students researching in different areas of Computational Linguistics Natural Language Processing, Machine Translation and Corpus Linguistics and so far have had 20 PhD students who successfully completed their PhD degrees.

I am Executive Editor of the Journal of Natural Language Engineering (Cambridge University Press).

I am Editor of the Oxford Handbook of Computational Linguistics (Oxford University Press).

I am Editor-in-Chief of John Benjamins’ book series in Natural Language Processing.

I am Programme Chair of the biennial international conference ‘Recent Advances in Natural Language Processing’ (RANLP) since 1995. Last year the conference (RANLP’2017) took place in Varna from 4 to 6 September 2017 and the next edition will take place again in Varna early September 2019.

Since 1996 I am also conference chair for the annual conference ‘Translating and the Computer’ which takes place every November in London. This year’s conference (TC40) will take place on November 2018.

Since 2013 I am one of the chairs of the (so far biennial) international workshop ‘Multiword units in Machine Translation and Translation Technology’ (MUMTTT’2017).  The last edition of the workshop will take place on 14 November 2017 in London.

Last year I was also Chair of the international conference ‘Computational and corpus-based approaches to phraseology’ (Europhras’2017) which took place on 13 and 14 November 2017 in London.

I was Co-Chair of the Programme Committee of the International Joint Conference on Natural Language Processing (IJCNLP’2013) which took place in October 2013 in Nagoya, Japan.

I am member of the Programme Committee of various international conferences.

I have also given a number of invited talks at universities and research centres.

I have been invited to act as evaluator of the research projects for a number of national and international research and funding councils and evaluator for research quality, performance and promotion for a number of universities in different countries including the UK, USA, Canada, France, Spain, Switzerland, Hong Kong and Dubai.

I am Vice-President of ASLING, the Association for Promotion of Language Technology, based in Geneva.