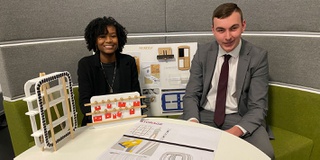 Women’s football has been closely associated with the Great War.  This is due in a large part to the munitions workers’ sides that pushed the game onto a new level of acceptance. In the decades that followed World War One, women’s football sides would be common place in the UK. By June 1939, the top sides in the sport were in the central belt of Scotland competing for a World Championship. Rutherglen Ladies, claimed the title when they beat the old Dick Kerr side in 1923, were taking part in the event but it was a former Rutherglen player, Linda Clements that made the biggest impact in the tournament.  Playing for the Edinburgh City Girls she scored two goals in a 5-2 win against Dick Kerr’s successor side, Preston Ladies. A 7-0 demolition of Glasgow Ladies a few weeks later wrapped up the title for the City Girls.

Women’s football has been closely associated with the Great War.  This is due in a large part to the munitions workers’ sides that pushed the game onto a new level of acceptance. In the decades that followed World War One, women’s football sides would be common place in the UK. By June 1939, the top sides in the sport were in the central belt of Scotland competing for a World Championship. Rutherglen Ladies, claimed the title when they beat the old Dick Kerr side in 1923, were taking part in the event but it was a former Rutherglen player, Linda Clements that made the biggest impact in the tournament.  Playing for the Edinburgh City Girls she scored two goals in a 5-2 win against Dick Kerr’s successor side, Preston Ladies. A 7-0 demolition of Glasgow Ladies a few weeks later wrapped up the title for the City Girls. 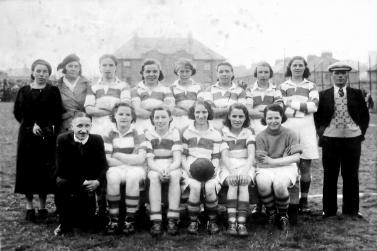 Edinburgh City Girls, one of the prominent pre-war sides along with Preston and Bolton Ladies that struggled to operate during the 1940s. (Image courtesy of Keith Adamson)

Early Matches During the Phoney War

Within two months of the tournament’s completion, the Second World War was declared.  During the early stage, the so-called phoney war, Preston Ladies played a series of matches against the newly formed Bolton Ladies. The Bolton side boasted former athletics stars Nellie Halstead and Ivy Robey, and the series extended through the autumn of 1939 into early 1940. Bolton manager Ernest Hunt also organised a joint side which took on a Welsh Select XI at Tredegar recreation ground in 1941. By the following year however, Alfred Frankland the Preston manager had withdrawn his side from competition, for the duration of the war. John Kelly, the organiser of Rutherglen Ladies also withdrew from competition. He staged fund raising concerts but his football side would not take the field again.  The Edinburgh City Girls did attempt to play on and a derby match was held at Musselburgh’s Olive Bank in the spring of 1940 against Edinburgh Ladies. But the City Girls also struggled when club organisers Mary and Alfred Proctor left Edinburgh for Middlesbrough and the collapse of St Bernards FC led to their home ground, the Gymnasium, being demolished. With many of the top sides suspending, the impression has been given that women’s football went into abeyance during World War Two, but this was far from being the case.

The Return of the Factory Sides

As with the 1914-18 conflict, women were called up for war work in the munitions factories and as mechanics and engineers in numerous support industries. They also filled roles as air raid wardens and bus and fire engine drivers.  Football teams associated with various works were organised and one match played on June 21st 1940, pitted workers of the Stirlingshire plants Patons & Baldwins and the Denny Ironworks (Cruikshank & Co, Ltd). Support workers also formed sides. In Portsmouth for instance, local bus workers met at Privett Park on Christmas Day 1941. Conductresses of the Hants & Dorset Motor Services, beat the women drivers of the Pro-incial Omnibus Co 4-3. In Woking, a triangular contest was organised featuring sides from the Lion Works in Woking and the Guildford branches of Woolworths and Marks & Spencer’s. The Lion Works took the trophy after a 2-0 win against Marks & Spencer’s. Much of the money raised by these events went to local Red Cross, Ambulance Brigades or war charities. Married v Singles matches, a tradition that dated from the 18th century, were revived and one such match played in the Fife village of Ladybank in 1941, raised funds during War Weapons Week. Despite war time restrictions, the Shrovetide football matches continued and the 1943 match at Ashbourne hit the headlines when Doris Mugglestone became the first recorded woman to score a goal in the centuries old event.

League Competition and the Football Authorities

During the spring of 1944, Kent organised its own league with a well known Kent Sportsman donating a trophy for the winning team.  The vice president of the Kent County FA, the 90 year-old James Bray, warned that grounds offering to host matches would be black listed, but the competition continued and by September of 1945 Aylesham Ladies, a side made up of women from the Snowdown Colliery had an unassailable lead at the top of the table.

In 1902, the FA in England had instigated restrictions on women’s football. These were lifted to allow the charity matches of 1916 -18 to take place in the large stadiums.  In 1921 however, a more extreme version of this embargo was introduced, and unlike the Great War there would be no relaxation of restrictions during this new conflict. The large inner city stadiums of the football league remained out of bounds.

The Contradictory Attitudes of the Governing Bodies

Examples of the FA’s unbending attitude are numerous.  In 1943, an intervention by the association saw the cancellation of a match between Women’s Land Army sides at Peterborough United’s London-road. Another instance saw Mr H. R. Rigdem investigated by the Kent County FA after he officiated at a women’s match held at Medway Town. As a result, Mr Rigdem was removed as Rochester league secretary, a position he had held for 25 years. In Scotland, there were no such restrictions, not yet at any rate, a match played during August 1940, for instance, between the Denny Ironworks and the girls of the Cannerton Brickworks was refereed by Falkirk manager Tom Craig. Players were also involved with figures such as Alex Venters and Jerry Dawson of Rangers regularly refereeing matches.  In one game played in Kirkintilloch between Barr & Stroud and Switchgear, George Young the famous Scotland International officiated, with the winners being presented with the Kirkintilloch Charity Cup.

The National Services Act of December 1941 provided for women between 20 and 30 to be called up for service in newly created women’s corps such as the Women’s Auxiliary Air Force and the Auxiliary Territorial Services. Football was included as part of the services recreation programme with prospective players receiving in many cases professional training.

WAFF side which took part in a charity event held at Melksham, Wiltshire during June 1944

At the outbreak of war players from many of the top clubs were either called up for active service or drafted into war work. Sunderland player Raich Carter joined the RAF and became a Physical Training Instructor as did Arsenal squad members Alf Kirchin and George Swindin. Services teams were common place. In 1943, an ATS side travelled to Weldon to take on a works side of the Corby Steel works known as the Lancashire Lassies. In July 1944, the Daily Mirror printed a picture feature of a Manchester works XI training in preparation for matches against ATS and WAAF sides. 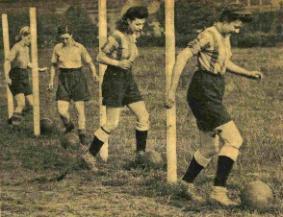 Manchester side in training to face ATS and WAAF sides

Similar to the Great War women’s football enjoyed a boom with the secession of hostilities.  Many of the re-established and newly formed sides had demobbed service women swelling their ranks. Dorothy Wainwright, for instance, learned her football skills in the WAAF and in the spring of 1946 signed for Preston Ladies. The resumption of matches against Bolton didn’t go so well for Preston however being dumped 9-3 on their home patch. 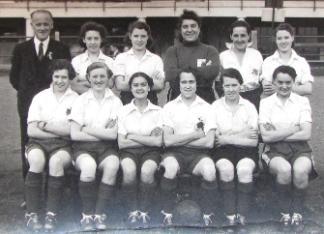 Bolton Ladies pictured in 1946. They were the foremost women’s football side in the immediate post-war period. (Image courtesy of Keith Adamson)

Linda Clements along with another former City Girl, Mary Leslie decided to reform their old side under the name Edinburgh Lady Dynamos.  The Dynamos match at their new ground at Meadowbank against Bolton Ladies attracted over 17,000 spectators, one headline read, Came to jeer, Stayed to cheer.  Linda Clements however, noted the contradictory attitude of the SFA in a press interview:

The SFA don’t recognise us – they don’t like us playing but we shall carry on, and soon there will be many more women’s teams in the country.  Already there are more than six in Scotland.

The large crowd were attracted to the match and the apparent expansion of the women’s game saw the SFA take action. The following year Edinburgh Council refused a performance licence for another Dynamos v Bolton fixture at Meadowbank, a move influenced in part by SFA secretary George Graham.  In 1949, a circular was sent to all association clubs reminding them of the SFA’s new stance on women’s matches. As with England in 1921, games continued at alternative venues in Scotland with the works and factory environment providing a support structure for the women’s game. The years from 1939 to 1945 are worthy of further examination as it is a period of activity which has been largely understudied, certainly in comparison to the 1914-18 conflict. World War Two also produced a growth in women’s football which saw opportunities through the industrial and services environment for a new generation of women to be introduced to the game. The growth women’s football experienced during the Second World War would carry the game into the following decades, its influence lasting until the early 1960s. 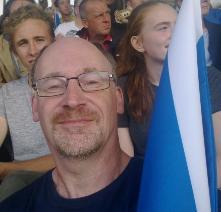 A Graduate of the Glasgow School of Art, Stuart has participated in exhibitions focusing on women’s football history, these included Moving the Goalposts, First Ladies of Football and a Game for Girls. He has written articles on subjects such as Art, Theatre, and Sports History for Mainly Museums, Discover Magazine, and Playing Pasts. Stuart is also a volunteer researcher with Kent University and was part of the Great War Theatre and Mapping Irish Football research projects. He has contributed to MG Alba’s Honeyballers and Rose Reilly documentaries, and the Futures Theatre Production Offside. He was involved with women’s football as part of the back room staff at Glasgow City FC and Queens Park WFC until 2019.