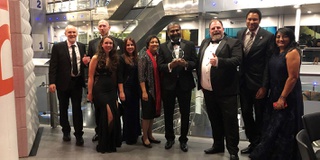 CLASS OF 2020: Graduate excels in business to further her career 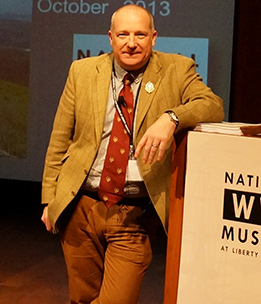 Formed on 9 June 1905 by a group of boys in East Street, SE7 it's fair to say that Charlton’s rise through the local leagues was quite incredible with 19 trophies in 10 years and a very healthy local support.

Long before Millwall or Crystal Palace became their rivals it was the local derby with the Army Service Corps based at Woolwich that was the most hotly contested fixture on the early Addicks calendar, a game often marked by disorder both on and off the pitch!

It’s fair to suggest that the Great War arrived at a time when Charlton were emerging into a significant local force, accelerated by the controversial decision of Woolwich Arsenal to head north of the Thames, an inviting vacuum appeared. Both rushing to join the colours or in work double shifts in the local armament factories, in 1915 the club wound itself up to fight the ‘Greater Game overseas’.

After five long years of war that saw the local area bombed by airship and flooded by a tidal surge caused by the Silvertown explosion the club reformed. Local Greenwich MP Sir Ion Hamilton-Benn (himself wearing the DSO awarded at Zeebrugge) became club president and raised the capital to move into the Valley, providing construction work for returning ex-serviceman and placing a permanent marker down in the community that could be called home. The war had taken its toll on the Addicks ranks however, the board minutes recording:

'We have a war record of which we are justly proud. Some thirty of our members served in HM Forces on the various battlefields of Europe. We regret that of this number, three have paid the supreme sacrifice, while six others have been wounded.'

The three men remained widely anonymous until the Charlton Athletic Museum (an entirely supporter driven project), set about identifying them. Today, after three years of research the trio have their names on a special plaque underneath the war memorial in Addicks Place outside the main entrance to the famous Valley ground, at last they are again rightfully remembered as each played their part in the history of our famous old club.

The first, early club secretary Jim Mackenzie lost his life at sea in September 1917 when the SS Heron was sunk. Mackenzie, a Scot who had settled in SE7 with his family from Dundee was a key member in the infancy of the club offering his own address as a contact to arrange friendly matches in the Kentish Independent of 1905. In November 1908, he enlisted in the merchant navy serving on the SS Heron whose regular cargo route was to Oporto. It was on this familiar journey as part of a wartime convoy in 1917 that she was sunk by the German Submarine U90 on the night of 30th September alongside her sister ship the SS Drake. The Heron, fully laden with a cargo of coal sunk almost instantly with a sole survivor, its Japanese crane operator Higo, picked up by the U90 the following morning. Jim and his 22 crew members are today commemorated on the deeply moving Merchant Navy Memorial at Tower Hill. Fellow Addick and Maritime Historian Steve Hunnisett has provided us with some outstanding research on Jim in recent years.

The second Frederick Chick, was the son of a Milkman Henry Chick who died whilst he was still a child. Fred was admitted to the Britten Street Old & New Workhouse in Chelsea, aged 6 along with 2 brothers and a sister. After transferring to the Christ College Working Boys Home in Camberwell in 1911 he was taught a trade as an Optical Lenses maker and it was around this time that he likely met Scott Kingsley in the same trade that led him to join the club as a trainer where he appears in a named 1913/14 team photograph. By the time Fred married Florence Gordair at St Stephens Parish Church, Walworth in November 1915 the club had ceased playing football and he shortly after enlisted into the Queens Own Royal West Kent Hussars, service number 2311. Chick’s unit did not serve in France but formed part of a draft to the 13 Middlesex Regiment who were serving on the Somme. On the 31 August 1916 Fred was killed in what was likely his first spell of trench warfare. Not going over the top but in a gallant defence of his position in the face of a severe German counter attack to regain recently lost ground. One of 243 men to lose their life in the battalion in August 1916, Fred Chick today lies in Caterpillar Valley CWGC having been found when the battlefield was cleared after the war alongside one of his comrades.

The final man was Herbert ‘Nobby’ Nightingale, for almost a century the forgotten man, the clue to his identity was hidden in the rarely seen 1921 handbook.

‘At Christmas 1914 the club was forced to close, the majority of the “Boys” having left to take their part in the great game overseas. The club are proud of their history during the war. Two of the members answered the last call, J. Mackenzie, the first honorary secretary and A. Nightingale, a clever half back, in addition, five other members of our pre-war team are privileged to wear the gold stripe that donates wounds of honour.'

In 2016 we were able to ascertain that this is an error and should read H Nightingale, known as ‘Nobby’ he played for both the Addicks and Woolwich Polytechnic Athletic Club. In early 1915 Herbert, like many Addicks enlisted in the Royal Garrison Artillery and served with the 35th Trench Mortar Battery attached to the 1st Canadian Division, he lost his life close to the Belgian village of Messines on the 13 January 1916, today buried in RE Farm Cemetery the inscription on his grave poignantly reading, “Let those that come after see, that this name is not forgotten”

Today Addicks fans have not forgotten them. 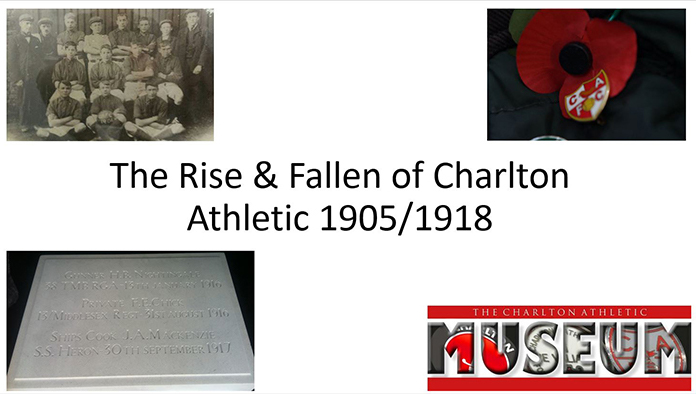 ‌Clive Harris owns battlefield tour company Battle Honours Ltd as well as being the Charlton Athletic FC historian and trustee of the supporter led museum, he co-wrote The Greater Game - Sporting Icons Who Died in the Great War and recently completed his MA in History of Britain and the First World War at the University of Wolverhampton.