Having received planning permission for the redevelopment of its outdoor courts into an exclusive high quality netball facility, the University of Wolverhampton has appointed a new Head of Netball to lead the way to sporting success.

Sally Bromley, the new Head of Netball in the Institute of Sport based at the University’s Walsall Campus, will lead on the enhanced strategy to grow netball provision with specific focus on student engagement and promoting more opportunities through the British University Colleges Sport competition.

Sally joins the university with a wealth of experience and knowledge across the breadth of the netball participation and performance pathways. She is also the current head coach for the Invictus Trust Academy and the under 17s assistant coach for the Vitality Netball Super League side, Severn Starts.

She said: “I am absolutely delighted to be joining the team at WLV Sport and very excited about the opportunities to develop the netball programme here for the University students and the local netball community.

“The University has such amazing facilities for both indoor and now outdoor netball, and with the Commonwealth Games on our doorstep just around the corner, there couldn’t be a better time to be starting our new era of Netball here at the University.

“The netball courts will provide opportunity for students, staff, and academic provision and provide a facility to the local community for training, competition and league match play.” 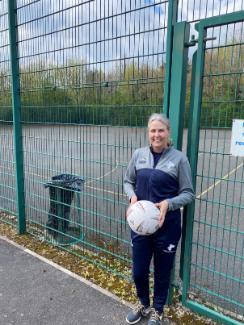 Throughout the process, England Netball have provided ongoing support and Charlotte Malyon, England Netball Facilities Development Manager, said: “England Netball is delighted that the redevelopment of the outdoor netball courts at the University of Wolverhampton's Walsall site has received planning permission.

“These facilities are critical to the recovery of our sport in the West Midlands, and we look forward to working in partnership with the University and Sport England to ensure that women and girls can access their support networks through netball and regain the physical and mental health benefits that being involved in our sport can bring.”

The process of tendering for construction work has begun with work beginning in the summer.

Anyone interested in studying in the Institute of Human Sciences, should register for one of the forthcoming Virtual Open Days.