CHARLOTTE LEM - GRADUATE MOVES ON TO NEXT CHAPTER

Charlotte Lem has moved on to the next chapter of her life by securing a job in public relations.

Charlotte, 22, from Wolverhampton studied for a Multimedia Journalism degree at the University of Wolverhampton.

She originally thought that she wanted to be a teacher and studied a teacher training course for a year after finishing her A Levels in English Language, English Literature and ICT.

"Teaching wasn't really for me," Charlotte said.  "I realised that quite quickly.  And then I saw a leaflet about journalism and as I've always been interested in writing and had a passion for words, I thought that a degree in Multimedia Journalism would suit me much better.

"I chose the degree course because I was interested in writing and wanted to study somewhere that would extend my skills and my original idea was to maybe go into writing for newspapers.

"I learned a lot during my time at University.  It's a varied course, we did TV, Radio and Film as well as writing and PR - a bit of everything and I also did work experience at PR agencies, newspapers, radio station and in the University press office." 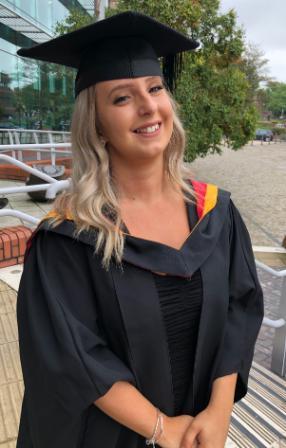 After studying for three years, Charlotte secured a job at marketing and PR agency, 8848, based in Coven, Staffordshire as a Junior Account Executive. She is now working on accounts for M6 Toll and Persimmon Homes.

Charlotte graduated with a First Class Honours degree and picked up the Express & Star Award for Excellence in Journalism and The Nicholas Jones Media Prize for Outstanding Final Year Project.