Mark O’Shea, Professor of Herpetology at the University of Wolverhampton, was interviewed by Sky News on Thursday 16th May.

The interview was in response to an announcement by the Wellcome Trust that they were donating £80,000,000 towards snakebite research and the improvement of available antivenoms. Here Mark is demonstrating the recently developed ICP Monovalent Papuan Taipan Antivenom to treat the bites of the highly venomous Papuan Taipan (Oxyuranus scutellatus canni) which causes a large number of deaths in Papua New Guinea (PNG), resulting in PNG being listed as one of the ten countries with the highest snakebite death rate (per capita) in the world. 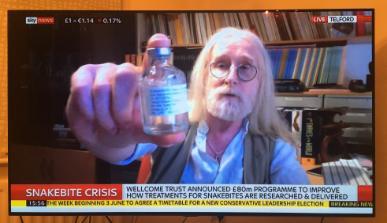 Papuan taipan venom contains both pre- and postsynaptic neurotoxins that respiratory paralysis, and a procoagulant that ironically leads to incoagulable blood by using up all of the clotting factor. These are large snakes (2.5-3.0 m), with high venom yields (up to 880 mg dry weight), and the ability to deliver multiple, rapid ‘stab-and-release’ bites, high up the body. The antivenom is produced for PNG by the Instituto Clodomiro Picado (ICP), at the University of San José, Costa Rica, using antibodies from horses immunised with venom from taipans captured and ‘milked’ by Mark and his colleagues from the Australian Venom Research Unit (AVRU), University of Melbourne. At around US$ 200 the much more affordable and equally effective ICP antivenom is less than 10% the price of the Australian antivenom previously in use, which means the glass ceiling limiting how much the PNG department of health can spend on antivenom each year, just got much higher and the country should no longer run out of antivenom to treat taipan snakebite victims.

Each year up to 138,000 people die of snakebite and up to 400,000 are permanently disabled by snakebite. In 2017 the WHO recognised Snakebite as a Neglected Tropical Disease (NTD). Hopefully the Wellcome Trust and WHO announcements are good news for snakebite victims and their families