Straight from the streets of Seattle, 14/48 WOLVERHAMPTON is landing at the Arena Theatre on June 16 and 17 and is set to showcase 14 plays over a 48-hour period.

14/48 WOLVERHAMPTON is the Wolverhampton satellite of the world’s quickest theatre festival. As a project, 14/48 aims to engage new audiences and provide a space to develop both emerging and experienced artists and theatre-makers, an ideal which is shared by The Arena Theatre, Wolverhampton which houses the festival.

The festival and its ideals are the brainchild of Jodi-Paul Wooster, who hatched the initial plans whilst working at South Lake Union, Seattle in 1996. From humble beginnings, the festival has developed into a gathering of Seattle’s most daring theatre artists and audiences. After 16-plus years, the festival has gone global and visits Wolverhampton for the University of Wolverhampton’s Artsfest. 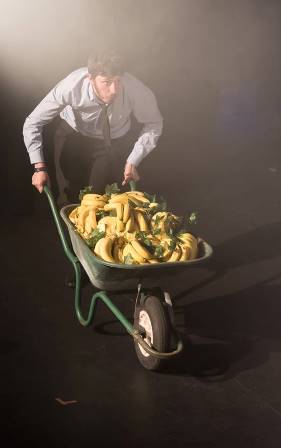 During the two-day period in the city, 14 plays will be written, directed, scored, designed, rehearsed and performed within 48 hours. A team of 75 artists from the across the Midlands, the UK and Seattle are engaged in the festival, producing 7 premiere plays per evening. They are challenged to simply create, and trust their fellow artists to create.

Neil Reading producer of 14/48 WOLVERHAMPTON said: “14/48 allows us to give local emerging artists an opportunity to demonstrate their skills against the clock. The 14/48 family spans across the Atlantic and throughout the country allowing collaboration to happen outside the parameters of the festival. We are proud that the network developed at 14/48 Wolverhampton 2015 and 2016 has helped many of the artists gain professional work hosted at The Arena Theatre and across the region.”

In true support of local businesses food and drink for the artists will be provided by local eateries: The Hungry Bistro, Uppal’s and Bodrum Delight. Sacre Brew – a local microbrewery based in Wolverhampton have brewed a unique 14/48 WOLVERHAMPTON beer that will be served throughout the festival and available to purchase.

14/48 Wolverhampton is the Wolverhampton satellite of the world’s quickest theatre festival, engaging new audiences and developing both emerging and experienced artists and theatre makers. Developed in Seattle in 1997, 14/48 has established an international ‘family’ of veteran artists who are connected by the experience of the festival and its values. Leicester is the festival hub within the United Kingdom. www.1448uk.com