A University of Wolverhampton student has scooped gold at a Junior European Judo Championship.

Sports scholar and judoka Acelya Toprak’s 57kg gold medal at the Leibnitz Junior European Cup in Austria on Sunday 4 June was the standout result at the weekend for the GB junior judoka. 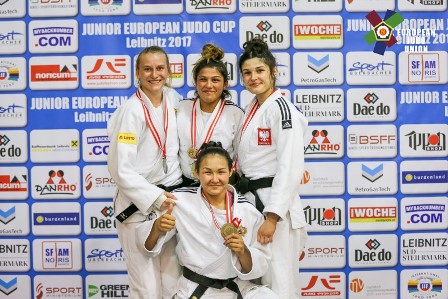 Acelya, who was recently named Sportswoman of the Year at the University’s Sports Awards, has had an injury hit start to 2017 but was able to medal at her last tournament in St Petersburg in April.

The talented student currently trains fulltime at the British Judo Centre of Excellence at the Walsall Campus.

She showed good contest management as she recovered from conceding two early shidos against Ichinkhorloo Munkhtsedev (AZE) in her opening contest to get two waza-ari on the board and move into the next round.

Her next three contests on the way to the final were all won by ippon against Xenia Coban (GER), Anita Cantina (ITA) and Junior World No.5 Julia Kowalczyk (POL). Against Cantina, Toprak showed her conditioning and contest management as she forced the Italian to pick up a third shido in golden score.

Current Junior European champion and Junior World No.1 Pauline Starke (GER) was her opponent for gold and it was close contest throughout. With little under two minutes left Starke went for an attack but the British judoka transitioned well on the ground and secured osaekomi. The German judoka tapped not long after to give Toprak her second Junior European Cup gold medal.

Speaking afterwards GB Junior coach Matt Purssey said: “Very good performance from Acelya today. She was focused and fought with intensity in all of her matches. A deserved champion.”