The University of Wolverhampton has appointed a new Armed Forces Co-ordinator in its Centre for Lifelong Learning.

David Thompson is an Army Veteran with 25 years’ service and will be the first point of contact for military personnel enquiring about training or courses.

David started his career with the Royal Corps of Transport (RCT) and progressed through the ranks with postings attached to the Airborne Forces (including two of the three regular Parachute Battalions) and two tours by attachment to Special Forces.

In the wider Army he was assigned to NATO’s Allied Rapid Reaction Corps (ARRC) in Germany and latterly to 4th Division before retiring as a Staff Officer in 2010. Since leaving the Army, David has been employed by Aegis in Baghdad and G4S (Specialist Training division) in London, Hereford and Afghanistan before moving to Compass UK and Ireland as Head of Resource Network, responsible for the provision of flexible workforce solutions across the business.

David said: “This new position provides me with a very new and challenging environment at the University.  It is of particular significance to me being back in my home town. I look forward to continuing and developing the good work and relationships between the University of Wolverhampton and all three of our Armed Forces, their dependants and those in association.” 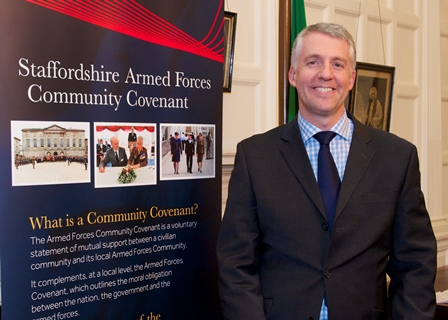 Dr Alison Felce, the University’s Head of Work-based Learning, said: “We wholly support the Armed Forces community by delivering bespoke, education opportunities. We are investing significantly in research, especially with regard to our recognition of prior learning policy that enables service personnel to access our courses based on their individual experiences and qualifications. We want to continue to develop our course offer to the Armed Forces and David brings a wealth of knowledge and expertise to help us achieve this.”

The University of Wolverhampton has built a solid reputation across the services for delivering tailored education and a strong portfolio of courses for military personnel and the wider defence community.   It has successfully delivered an award winning, business start-up programme “Supporting the Unsung Hero” for dependants of Armed Forces personnel, originally a LIBOR funded project and currently sponsored by HSBC.

Courses include a PGCE delivered in conjunction with RAF Cosford, the Defence College of Healthcare Education and Training (DCHET) and RAF Cranwell and accreditation for Physical Training Instructors’ courses.

In addition, the University of Wolverhampton is a preferred supplier to the Career Transition Partnership, which manages resettlement services for the MoD and is registered with the Enhanced Learning Credits Administration Service (ELCAS), which provides the administrative support for the MoD ELC. The University is committed to providing injured and sick service personnel work experience and learning opportunities under the Universities in Support of Wounded, Injured and Sick Service Personnel (UNSWIS) scheme and has signed a pledge to the Defence Corporate Covenant.