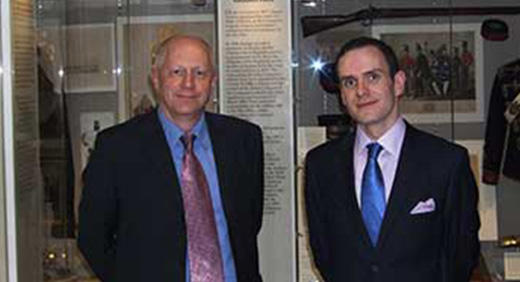 Each year, the Society for Army Historical Research, Britain's most prestigious military history society, awards the Templer Medal for the most significant book about the British Army published in the previous 12 months.

This year, it has been presented to Professor John Buckley for his book Monty’s Men, a study of the British Second Army 1944-45.

The University has achieved a double success in the awards; the runner up is Stemming the Tide, a collection essays on the British Army in 1914 edited by Dr Spencer Jones, with contributions from Professor Stephen Badsey and Professor Gary Sheffield.

Professor Buckley spent several years researching his book, which has sold around 3,000 copies and will be out in paperback this summer.

He said: “It is very nice to be recognised, and ties in with work we have been doing here for a long time. Nomination for this award carries considerable prestige in British military history circles.”

The announcement and presentation for the winner for took place at the society annual general meeting in London on Wednesday April 30. There were 33 nominations for the award.