A night of celebration for University 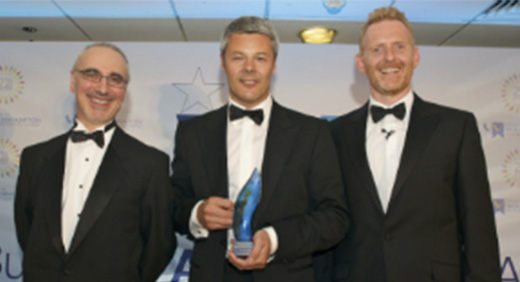 The annual Business Achievement Awards, which aims to highlight the University’s commitment to enterprise and student employability, saw winners from six different categories as well as a special prize for the winners of the University’s ‘The Pitch’ initiative.

The ‘Graduate Employee of the Year’ award recognised a graduate from the University of Wolverhampton who has made a significant impact within a business or organisation, demonstrating excellence on a specific project or programme.

The winner of this award was Rhys Thomas, from Tough Furniture Ltd. Rhys helped develop new designs for the company which were achieved through efficient manufacturing processes. Thanks to his work he has since been taken on permanently by the company as their Design Manager.

The second business award of the evening was for the ‘Business Collaboration of the Year’, which celebrated the success of a recent collaborative project between the University and a business.

The winner of this award was The Caparo Innovation Centre, an enterprise borne out of collaboration between the University of Wolverhampton and the multinational steel manufacturing group Caparo.

Finally the ‘Business Innovation of the Year’ award recognised the enterprise which has most successfully employed innovation to enhance its performance and/or competitiveness in the West Midlands region.

The award for this category went to Advanced Chemical Etching (ACE), a manufacturer of metal components serving a range of markets including the aerospace, automotive and medical sectors.

Speaking about the awards evening, Vice-Chancellor of the University of Wolverhampton, Professor Geoff Layer, said: “The Business Achievement Awards was a truly fantastic evening, and I’d like to offer my congratulations to all of our nominees.

“The University is committed to strengthening the economy within the region, and it’s through our collaborations with businesses and the hard work of our graduates that we will achieve strong economic development for the Black Country and surrounding areas”.

The awards ceremony also recognised the University alumni who have excelled in their chosen field through three different awards.

The ‘Emerging Alumnus of the Year’ award recognised a graduate from the last five years who has made a significant impact in their industry or profession.

The winner of this award was Mat Winzor. Mat has been a leading figure in the redevelopment of the Boys’ PE curriculum at Deansfield Community School, and last year won the Daily Mail RBS Real Rugby Heroes award for grass roots development of the sport.

Secondly, the ‘Alumnus of the Year: Enterprise and Leadership’ award celebrated a graduate who has made an important contribution to the local, national or international community through an enterprising business venture, or has improved the way business is done through innovative leadership.

The winner of this award was Stephen Shaylor, CEO of Shaylor Group PLC. Stephen’s reputation for excellence has led his business to be named by the Sunday Times in their ‘Top 100 Companies to Work For’ list as well as gaining the Investors in People award.

Speaking about his success, Stephen said: “Since graduating in 1993 this was the first time I had returned to the University. I was very impressed with the progress that the University has made, in particular the infrastructure, facilities and range of academic courses available.

The University of Wolverhampton has a clear vision of where it is heading as regards the very important part it plays in the local community and its commitment to excellence in respect of academia in the local, as well as on the national and international stage.

“I am delighted to have been the recipient of the Alumnus of the Year award for Enterprise and Leadership at this inaugural event, and look forward to collaborating with the University through business initiatives moving forward”.

Finally, the ‘Alumnus of the Year: Contribution to Society’ award marked a graduate from any year who has enriched or transformed the lives of others, or has overcome significant personal adversity either within their professional career or personal life.

The award for this category went to Vijay Strestha. Vijay has made significant contributions to the development of his home country Nepal – often cited as one of the poorest countries in the world.

Vijay has worked with the University’s Centre for International Development and Training (CIDT) in Nepal and for the past ten years has led a team of over 130 staff there during times of national insecurity and political unrest.

A further award was also presented at the dinner to the winning team from the recent ‘The Pitch’ event hosted by the University.

‘The Pitch’ saw regional schools and businesses come together in an exciting and educational event at the University’s Telford Innovation Campus.

A team of pupils from Blue Coat C of E Academy, Walsall, were lauded at the awards ceremony after claiming the ‘Best Overall Pitch’ title at the event.