Two members of University of Wolverhampton staff are celebrating after winning gold medals at the Commonwealth Judo Championships. 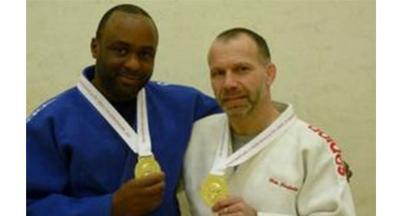 Mike Chamberlain and Wayne McDonald each clinched medals in individual categories of the Masters Section of the event, held at the Cardiff Millennium Centre at the end of January.

Mike, who is the University’s Director of Sport, won his medal against fellow English competitor Tony Sarwar in the Under 73kgs category of the 45-49 age group.

Meanwhile 41-year-old Wayne from Wolverhampton, who is the University’s Judo Club Coach, picked up his gold against South African competitor Mark Desfountain in the Under 90 kgs category of the 40-44 years age group.

Mike, 45, from Stourbridge, said: “Neither of us had fought for three years having retired from competition, but there was an attraction to come back and fight in the Commonwealth Masters, which comes around every four years. We only had a couple of months to prepare, so we’re both delighted to have won gold medals. I think our previous competition experience was a major factor!”

Wayne has also enjoyed a successful career in the sport, having won the British Masters Championships on three occasions, and having represented Great Britain, along with Mike, in the World Masters Team Championships in Moscow a few years ago.