A new member of the University of Wolverhampton Race Team (UWR) has joined the pack at the Telford Innovation Campus.

Following the success of the recent ‘Wolves in Wolves’ project which saw 30 wolves statues placed around Wolverhampton City Centre and then successfully auctioned off to raise money for charity, the University of Wolverhampton has commissioned a Race Team Wolf to be permanently on display in Telford.

Local artist Nigel James Kilworth, who worked on some of the original Wolves on Wolves statues, was commissioned by the University to create the Race Team Wolf.  Having trained originally as a precision engineer and a graduate of the University’s School of Art, Nigel also studied at the Jacob Kramer College of Art. 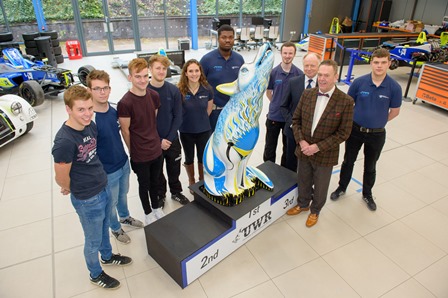 He said:  “I really enjoyed the educational learning experience when painting two wolves for the successful Wolves in Wolves project and I am dedicated to promoting art in the local area.

“Although there were strict guidelines in place, which isn’t my usual Fine Art approach to experimental painting, I could really feel that the University had a passion for racing and that the team was instrumental in promoting engineering and inspiring people to study at the University.”

The inspiration on the design originates from the word winners, using the colours of the Race Team.  Nigel said:  “The aim was to produce a piece of work that is kinetic from all angles taking the viewer on a journey up and down and around as they look at the different sides of the sculpture, juxtaposed to the experience of going round a race track yet at the same time keeping the wolf visible.” 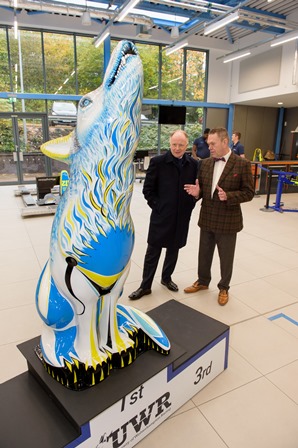 Professor Ian Oakes, Deputy Vice-Chancellor at the University of Wolverhampton, said:  “The Wolves in Wolves project had a real impact locally and we still have our commissioned wolf, Hunter, in place outside the George Wallis Building where the Wolverhampton School of Art is located.

“We wanted to create a legacy for the successful Race Team in Telford and decided that it would be fitting to commission another wolf which would take pride of place at our Telford Innovation Campus.”