Kick off for National Futsal Series on campus 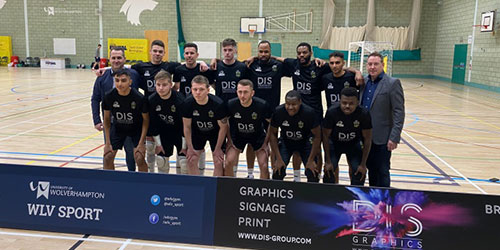 The University of Wolverhampton is to play host the national league of futsal this month.

Futsal is similar to football, but is played indoors and on a smaller hard court.

The National Football Series (NFS) is in its inaugural season, and is the premier league of futsal in the UK.

The University’s Walsall Campus will host a tier 1 fixture day on Sunday 23 February 2020 when Team United Birmingham will take on Pro Futsal London.

The University has also been chosen by the Football Association as the host venue for the finals weekend in May 2020. These will be the end of season finales with a combination of Cup finals and play offs for both men’s and women’s teams on Sunday 24 and 31 May 2020.

James Dale, Sport Performance and Development Manager at the University, said: “We are extremely excited about the NFS as it provides the elite level pathway for our students to transition for their University competition. This was highlighted in December with three current University students being named in the Team United Birmingham Futsal Squad."

“The next NFS day on 23 February is sure to be another full house and provides a fantastic opportunity for students and staff to watch the highest level of futsal on their doorstep.”

“We would like to also extend our thanks to DIS Graphics who are the headline sponsor for the events.”

For more information about the National Futsal Series, visit: http://www.thefa.com/competitions/national-futsal-series

For more information about sport at the University of Wolverhampton, visit: www.wlv.ac.uk/sport