Take a Break with Fairtrade Fortnight

It’s Fairtrade Fortnight at the University, running until 12 March 2017, and the theme this year is ‘Take a Break’.

The University is running a Fairtrade coffee morning at its main catering outlets across our campuses tomorrow (Tuesday 28 February), with a piece of cake and coffee. There will also be banana pancakes using Fairtrade produce from the counters.

In Millennium City Building (MC), City Campus, representatives from Wolverhampton Fairtrade shop will also be setting up in the Street area to sell their Fairtrade produce. Students can also enter the raffle this week to win a Fairtrade hamper from Catering. 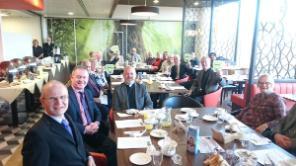 On Friday, the University also hosted Wolverhampton Fairtrade Association’s AGM and had a Fairtrade breakfast in City Campus hospitality suite – we host this every year and it was once again a great success.