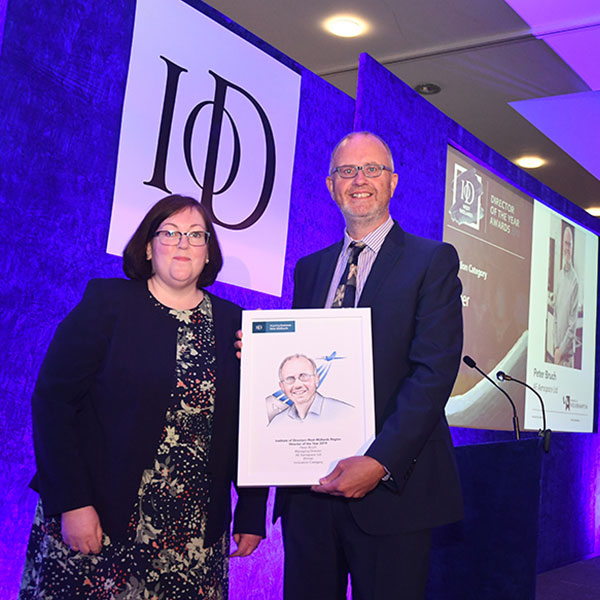 Cat Mirley created ten bespoke, hand-rendered illustrations for each of the winners at the Institute of Directors (IoD) West Midlands Awards held at the Warwickshire County Cricket Ground recently. Students from the Illustration and Visual Communication degree course have been designing awards for the IoD for seven years running.

The IoD West Midlands region covers the counties of Staffordshire, Shropshire, Herefordshire, Worcestershire and Warwickshire, as well as the urban areas of Birmingham, Coventry, Solihull and the Black Country and is made up of over 1,800 directors and senior decision makers.

Cat, a third year student studying for an Illustration degree at the Wolverhampton School of Art and is due to graduate in September, personally designed each award based around the achievements and successes of the winners' individual business.

Jordan Louise Lowe, Institute of Directors West Midlands, said: "We were delighted to commission ten bespoke trophies for this year's Director of the Year Award winners and were thoroughly impressed by Cat's talent, creativity and attention to detail. It's always a pleasure to work with the University of Wolverhampton and further our relationship with the staff and students. The IoD would like to thank Cat Mirley and John Clementson for all of their support and we look forward to working together again in the future."

Cat, who has a lifelong enthusiasm for drawing and creating, said:  "I was very happy to be able to work on the IoD award trophies again this year. It was a privilege to be asked. I found it to be a challenging yet rewarding task and the lessons I learned whilst working on a job of this size will be invaluable moving forward."

John Clementson, Senior Lecturer at the University, said: "Working with the Institute of Directors offers our students a tremendous challenge and unbelievable opportunity to engage with 'real-world' practices. This year's illustrations are a credit to Cat Mirley and we welcome continuing our relationship with the Institute."

For anyone who already has their results, applications can now be made through the Clearing website, calling the HOTLINE on 01902 518585 or contacting us through our Social Media channels on Twitter, Facebook or Instagram.  Anyone interested in studying at the Wolverhampton School of Art should register for the next Open Day on Saturday 12th October 2019.