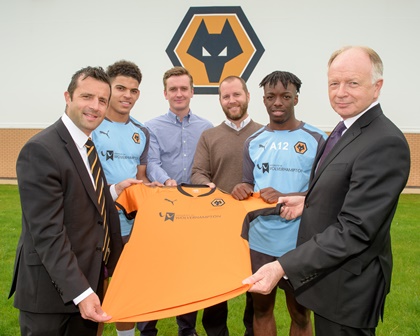 The University of Wolverhampton has renewed its role as principal sponsor of the Wolves Academy.

The new three-year deal between the University and the club follows on the back of a highly successful partnership agreement launched in 2014.

A key part of the initial agreement was the creation of internships and placement opportunities for University of Wolverhampton students and graduates.

A total of 15 students gained vital hands-on experience at the academy and the club working in a variety of roles covering sports science, sports psychology, strength and conditioning, medical, media and commercial specialisms providing a unique, and long-term, football club to university link.

A number of students who carried out internships have since gone on to successfully gain full-time roles at the club.

There will also be the continuation of a 40-week placement in the club’s marketing department and opportunities to gain matchday experience for journalism students within the club’s media team.

Part of the latest agreement is a new placement project offering graduates international opportunities in China and South East Asia with partners such as Fosun - Wolves’ parent group.

The University’s logo will continue to be positioned on the front of all the Academy age groups playing shirts, up to and including the u18s side and prominent locations at the club’s academy based at its Compton Park training complex.

The University will also have a variety of advertising inventory at both the Wolves Academy and branding will also feature at Molineux, including pitch-side, on screens and in the matchday programme and on the club website. 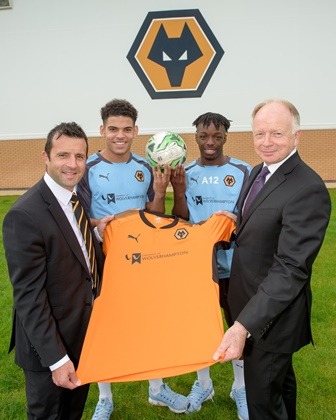 Laurie Dalrymple, Managing Director at Wolves said: “Here at Wolves we place great emphasis on our role in the local community and the strength of our relationships with other prominent organisations within the city.

“We are delighted to have such a close and positive partnership with the University of Wolverhampton, which continues to grow and develop year on year.

“The sponsorship agreement with regards to the Academy is of particular importance as it brings with it a sharing of ideas and resources, and we are delighted that the University take such a keen interest in the work the club carries out with our young players.

“Our Category One Academy is committed to reaching the highest standards possible, a view shared by the University in their own aims and ambitions, and once again we are hugely appreciative of the support provided in renewing the partnership for another three years.”

Professor Ian Oakes, Deputy Vice-Chancellor at the University of Wolverhampton, said: “We are delighted to be associated with Wolves and to be renewing our partnership with the club to support the development and education of its young players and the academy.

“The University of Wolverhampton and Wolves are two of the most recognisable and prominent organisations and brands in the region; both bringing huge inward economic investment into Wolverhampton and the Black Country.

“A key part of this agreement will be the opportunities which will be available to our students and graduates for work experience, placements and internships. We are particularly excited about the opportunity for international placements with partners such as Fosun.

“We have had some really successful student placements and internships with the club in the initial period giving them an insight into the world and business of football to give them invaluable experience and skills.

“It is an exciting time to be working with the academy with it being judged as one of the best in the country.

“Wolverhampton has a fantastic buzz about it at the moment with development at Wolves, the University and in the city so we look forward to a further successful three years.”

Wolves Academy manager Gareth Prosser said: “We are very proud of our Category One Academy, and the number of young players who have progressed through the ranks over the years to go and represent not only our first team, but also achieve international honours.

“We could only do that with outside backing, and that includes organisations like the University of Wolverhampton, who have provided fantastic support to us over the last three years.

“Our young players could only achieve the successes that they have done with the help of the Academy staff, and that includes many placements from the University of Wolverhampton, which, given the high quality of the applicants, have then turned into permanent positions.

“Once again I just want to say thank you to Ian Oakes and his team for everything that they do for the Academy, and we look forward to continuing our thriving relationship over the next three years.”