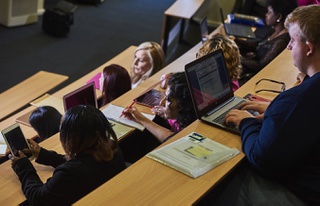 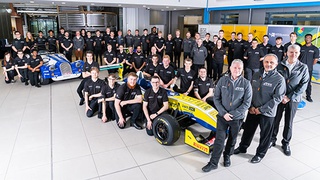 The Second World War attracts more academic, media and public interest than any other event in history, and it is an integral part of school and further/higher education curricula.

The Second World War attracts more academic, media and public interest than any other event in history, and it is an integral part of school and further/higher education curricula.

Why choose this course?

The Second World War attracts more academic, media and public interest than any other event in history, and it is an integral part of school and further/higher education curricula. This programme will enable you to study the subject in detail, to update your knowledge, and to become familiar with the use of personal accounts, including interviews and testimonies. You will be taught by experts in the field, and you will carry out your own research in your favourite area.

You will study in depth some of the key issues in the military, political, and social history of the Second World War, such as strategy, diplomacy and politics of Axis and Allied forces, the war in the air, the victory campaign in the West, and the war in the East, including life under German occupation, the fate of societies under the conditions of total war, and last but not least, the Holocaust.

What happens on the course?

Learning and teaching takes place through a mixture of lectures, seminars, and student presentations. You are only required to be in Wolverhampton for Saturday Schools, held once a month during term-time.

Assessments will be carried out through essays. There are no examinations.

This module will acquaint students with a thorough understanding of the varying approaches of the Axis and Allied powers in the Second World War to the development and implementation of strategy. It will critically assess key aspects of coalition warfare, the development of strategic approaches to the prosecution of the war, and the the link between wartime politics and diplomacy in the formulation of grand strategy. The module will introduce students to a range of prmary sources and secondary historiographical issues and interpretations and further develop skills of critical anlaysis and interpretation. Students will discuss and debate these issues leading to a final essay.

This module will provide an analysis of the developments of societies under the conditions of total war. Special emphasis will be placed on Germany, the UK, the US and the USSR. Additionally, the contribution of women to war efforts will be examined as well as the civilian experience of occupation.

The module will focus on the main developments of the war in the east and Germany’s occupation policies in Poland and the Soviet Union. Special emphasis will be given to ideologically driven strategies and their translation into the practice of occupation realities, the role of the occupied areas for the German war economy, forced migration, forced labour, and the treatment of prisoners of war.

This module allows students to produce a major piece of independent study, normally combining original research with a thorough analysis of the established literature in the relevant area. The ability of the student to complete this successfully is a significant component in demonstrating Masters level study. As such the dissertation will combine a comprehensive knowledge of a specific issue with effective use of research skills and thorough analytical skills.

This module will critically analyse the impact of air power on the conduct, experience and outcome of the Second World War. Students will address key historiographical debates through analysing secondary interpretations of major issues, whilst assessing primary documents and sources. The module will incorporate operational, economic and strategic issues in the employment of air power, but will place this alongside a critical appreciation of the moral, ethical and cultural effects of air power in shaping the Second World War.

The module will analyse some of the milestones in Holocaust historiography and the main academic controversies from the end of the Second World War to the present day. It will highlight the sources available as well as the methodological problems when using Nazi documents and survivors’ testimonies. Finally, it will focus on aspects of slave labour, mass murder and genocide, carried out in Germany and occupied Eastern Europe.

This module will examine the campaign in the Northwest European theatre of war from the D-Day landings in June 1944 through to the end of the war in May 1945. Students will critically analyse a range of key secondary and primary sources to assess the planning, conduct and impact of miiltary operations prosecuted by the Allied and German forces throughout the campaign. Particular attendtion will be placed on historiographical debates concerning the Normandy campaign, Operation Market Garden and the Ardennes Offensive, but lesser known actions in the Autumn of 1944 and Spring of 1945 will also feature. The impact of the war on soldiers and civilians alike will feature, alongside the political / command levels.

This module allows students to produce a major piece of independent study, normally combining original research with a thorough analysis of the established literature in the relevant area. The ability of the student to complete this successfully is a significant component in demonstrating Masters level study. As such the dissertation will combine a comprehensive knowledge of a specific issue with effective use of research skills and thorough analytical skills.

Successful completion of the course will enhance your career prospects and could lead to a specialised career in museums, education, armed forces, or as a battlefield guide, along with more general arts-related careers.

Attainment of the MA degree could also lead to doctoral research.

Everything you need to know about this course!

Our part-time Master’s programme will enable you to explore the history of the Second World War. Special consideration will be given to military conflicts, societies at war, and the Holocaust.

You will benefit from our international scholarly activities, among them the multidisciplinary conference series “Beyond Camps and Forced Labour. Current International Research on Survivors of Nazi Persecution” (Imperial War Museums, London), “Children and War: Past and Present”, battlefield tour/study trips to Normandy and the Low Countries and the University of Wolverhampton’s oral history programme and archive.

At the end of this course you will be able to:

These fees are applicable for new entrants in 2019/20. Fees are for the academic year only, any subsequent years may be subject to an annual increase, usually in line with inflation.

A 2:1 in a relevant degree is desirable, but applicants with other qualifications and non-graduates will be considered on individual merits.

You should also have a good standard of written and spoken English (IELTS 6.0 or equivalent).

Postgraduate Loans: Are available for taught and research Masters courses for students resident in England. For more information on eligibility and how to apply online visit: www.gov.uk/postgraduate-loan

Charitable Funding: You might also want to explore the possibility of funding from charitable trusts; please see the following websites www.acf.org.uk, www.dsc.org.uk/fundingwebsites or www.family-action.org.uk. Most charities and trust funds offer limited bursaries targeted to specific groups of students so you will need to research whether any of them are relevant to your situation.

University Postgraduate Loyalty Discount: The University also offers a postgraduate loyalty discount (https://www.wlv.ac.uk/study-here/money-matters/financial-support/postgraduate-study/postgraduate-loyalty-discount/): If you have completed an undergraduate degree at the University of Wolverhampton, you may be eligible for a 20% discount on the first year of a taught postgraduate programme.

Financial Hardship: Students can apply to the Dennis Turner Opportunity Fund (https://www.wlv.ac.uk/study-here/money-matters/financial-support/dennis-turner-opportunity-fund/) for help with course related costs however this cannot be used for fees or to cover general living costs.

If you are paying for the fees yourself then the fees can be paid in 3 instalments: November, January and April. More information can be found at www.wlv.ac.uk/howtopay