What is the Army Reserve?

The Reserves are predominantly a part-time branch of the Army that offer the opportunity for individuals to develop themselves, gain new skills and travel the world; all the while being paid. As an integral part of one of the largest and most professional teams in the country, the Army Reserve is active both at a global level and in local communities.

Most Reserve soldiers are in full time employment/education and volunteer some of their spare time to train and take part in operations alongside their regular counterparts. It is possible to join the Army Reserve as either an Officer or a Private soldier depending on your skill set and aspirations. Whether you have a talent for leadership or simply enjoy the outdoors, the Army Reserve will provide all the tools necessary for a unique and rewarding experience. 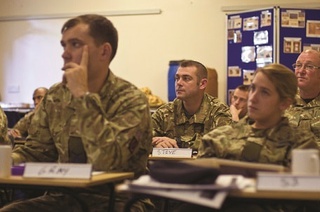 WHY JOIN THE ARMY RESERVE Summer Challenge is an accelerated Training package allowing those interested in a career in the Army Reserve to become qualified soldiers during the summer months.

The consolidated course will cover basic soldering skills such as shooting, fitness training and first aid, as well as providing the opportunity to take part in climbing, canoeing and abseiling. Food and accommodation is provided and there is the potential to earn up to £5000 during the summer break whilst training. The skills that you learn will assist you with your employability when you leave University.

Once trained during the summer there will be the opportunity to take part in the units annual two week exercise, which is regularly held around the world in locations such as Italy, Croatia or Kenya.

Being a Reservist isn’t just about military skills. It’s about building your confidence, working as part of a team and taking advantage of some exciting new opportunities.

When you join the University of Wolverhampton Reserve Platoon, your training will develop every aspect of you. From learning new military skills, to completing civilian qualifications or just developing your confidence. Being an Army Reservist is a great way to gain exciting new skills.

Time management, leadership and reliability are important qualities for everyone to have. In the Army Reserves they're vital. By training and spending time with University of Wolverhampton Reserve Platoon you will soon find that you start getting into some really good habits. The Army Reserve won't change your personality, but it can show you how to be methodical, organised and in charge of your life.

How much time you give depends on you. The minimum training commitment is 27 days; you need to complete this in order to get the annual tax-free lump sum known as bounty. Training takes place in the evenings and at weekends. There's also a two week annual camp or course. Apart from the camp, you decide how much training you do as long as you meet the minimum numbers of days.

When the Regular Army needs Reserve soldiers to support them it goes through a process called mobilisation. You will only be mobilised if the Army really needs you, but you or your employer can object if it would seriously affect your personal life or your work. While studying at the University you will not be mobilised to deploy on operations.

For many people in the Army Reserve serving on operations is a high point of their military careers. It's an opportunity to use all the skills and expertise that they developed in their training.

As an Army Reserve soldier, you can leave at any time you want, unless you have been mobilised. If you decide at any point that the Army Reserve isn't for you, or your life changes and you can no longer give it as much time, all you need to do is tell your military superior. He will check that you really do want to leave and explain the procedure to you.

Joining the Army as a Reserve won’t put your job at risk. There is a legal requirement to tell the Unversity as your employer, so make sure that you do. It’s also a good idea to do it in plenty of time. That way, if you need to take time off, you can give your line manager plenty of warning and they can arrange to cover your absence.

The rules for joining the Army Reserve are the same as for the Regular Army as you could be expected to serve alongside them. The general rules are:

Although most of the training you will do is very different from what you would do in your normal everyday life, a lot of what you learn is transferable to a civilian career. You could find yourself serving on humanitarian missions and military operations anywhere in the world.

The Chartered Institute of Management have assessed Reserve Basic Training and believe 25% of it is transferable to civilian life.

There are a number of ways to complete Army Reserve Recruit Training, this will be explained to you while you go through the enlistment process but the basics are:

Trained Soldier Course Part A takes 4 weekends but can be completed as a 1 week consolidated course; if you join the Infantry you then attend a further 2 weeks of training.

After this you must then attend Trade Specific training or the Combat Infantryman's Course. These courses are generally 2 weeks and this completes your Basic Training.

There are a number of ways of fast tracking through Army Reserve Recruit Training; these options will be explained to you during the enlistment process.  During your Basic Training you will learn how to live in the field under combat conditions and the basics of being a soldier.

Not all training is purely military, part of your development is to challenge you and one of the ways the Army does this is Adventure Training.  This can be anything from Mountain Walking and Climbing, Scuba Diving, Kayaking to Sailing a leg of a round the World race.  For most Army Reservists the only limitation is you.

As an Army Reserve soldier, you get paid for each quarter day of training.  The scale of training allowance and pay is based on what a Regular Army Soldier with the same job and rank would get.  Whilst studying at the University and undergoing your basic training you will be paid a training allowance starting at £41.73 for a full day, but this rises to £51.67 when you finish your basic training. This will increases as you get promoted and gain experience.

If you meet the training commitment, you get a tax-free lump sum called a bounty.  This will increase each year that you serve as a Reservist.  In your first year, it is £424, but after five years you will receive an extra £1674. As well as the bounty, there are also subsidies that will pay for food while you're on duty and travel to the unit.

As of the 1st January 2014 additional financial incentives to join the Army Reserve have been introduced as well as being paid for your time:

A new entrant will get a payment of £300 on enlistment into the Army Reserve.

On completion on Trained Soldier Course Part A and Part B £1000.

On completion of Combat Infantryman's Course £1000.

If you meet the minimum training commitment (usually 19 or 27 days), and also pass your Military Annual Training Tests (once per year) you get a tax free bonus payment on top of your pay. This is based on your level of commitment, and varies from £440 in year 1 to £1742 in year 5.

Training allowances, pay and financial incentives will be explained to you in more detail when you join the Army Reserve.

Future of the Army Reserve

Over the next few years the role of the Army Reserve will be expanded and they will work even more closely with the rest of the Army.  This means that there will be even more opportunities for people who want to enjoy the challenges that come with being a Reserve soldier.  No matter what your skills, you can get involved. There’s never been a better time to be in the Army Reserve, or a better time to do more and be more.

The University of Wolverhampton Reserve Recruitment Team will be attending various events at the University over the coming months, if you would like to have a chat with them about what the Army Reserve can offer you contact Captain Austin Miller for further details.

Private Tom Worth - Student at the University of Wolverhampton

“In the first two weeks of May, I took part in the 2014 Cyprus Cycling Challenge to raise money for Combat stress. Including the acclimatisation rides, we cycled 450 miles including the ascent of the Hors Category climb Troodos, which meant for a 9000ft day with very little flat or downhill.

As a university student studying at Wolverhampton, I never imagined I would be able to do anything like this, however joining the Army Reserves has opened up so many of these opportunities and I am already looking forward to next years event. It is the second time in three years I have visited Cyprus after previously going for a low level tactics camp which is just an example of the opportunities that the Army Reserve has given me.

It fits perfectly around my student life and it has meant that instead of spending my weekends in Sainsburys or Asda, I have spent them on live fire ranges, field exercise or adventure training. Along with this, I have found that I have been paid better than my student counterparts for a job I enjoy far more. Walking into the Careers Office is easily the best decision I have made and am looking forward to carrying on my role with 4 Mercian now that my studies have finished.”